And then a massive meal at the Sizzlers across the street (or, as they say in Boston, the Sizzlahs). They have an all-you-can-eat salad/soup/dessert bar. I do some serious damage to that thing. I stumble back to the motel I'm so full... 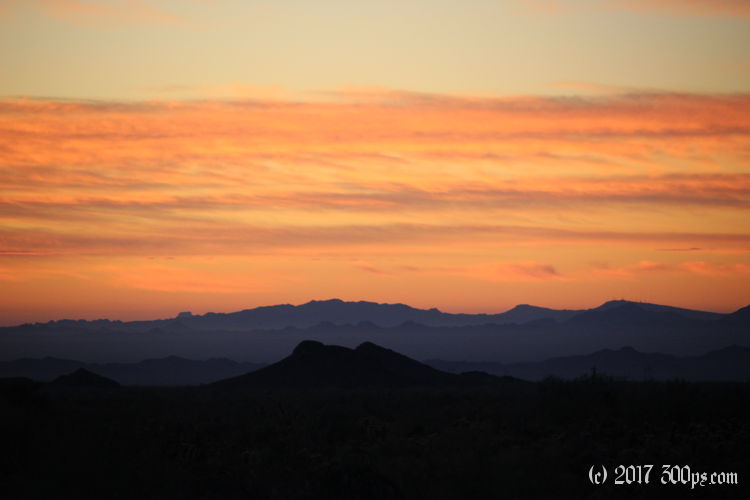 I went to sleep so early last night I'm wide awake and packing before dawn. The sun is barely up and the moon is still holding its own when I hit the road. I'm looking at close to another 20 miles to reach Wiley Well this morning. Starting the day with 6 liters on the bike just in case the road continues to be as nasty as it has been, although I'm more optimistic because when I climbed up the ridge last night to look around it appears like I will be descending a long ways to get to the valley floor to the east.

Now I'm somewhat concerned about food. The lack of shopping options in Mecca and my ignorance of the trail conditions conspired to have me leaving Salton Sea with only a 3-day pantry -- and kind of a sad one at that. I've got enough for dinner tonight but I'm short on breakfast/lunch/snack stuff. I decide to break out the pouch of instant cheese-mashed potatoes that I've been saving for an emergency. They need water to inflate and water I have, might as well take advantage of it. So breakfast is a big blob of mashed potatoes. Pretty tasty though after I add lots of spices.

The road has a nice surprise in store for me this morning: it's a hard-packed surface, not too rocky, and it's heading mostly downhill. I've got the wind at my back to boot. There's still the occasional wash to walk through but nothing like the past two days. I fly along (relatively speaking) and reach Wiley Well by noon. Because I've been traveling so much faster today I don't even need to stop there for water. I might as well head for Blythe with the rest of the afternoon to use up.

Eventually I arrive at I10. There are no other roads heading to Blythe so I've got no option but the interstate. I pump the tires back up to pavement pressure. It feels like I'm traveling at lightspeed on the pavement, even though the shoulder sucks -- it's got cracks every 10 feet that bounce the bike up and down.

I roll into Blythe and head to Starbucks for a coffee and some internet. I realize that daylight savings time ended last night. That means it will be getting dark around 5pm in California... ugh. Good thing I'm heading to Arizona tomorrow, I'll get an hour of daylight back. Arizona has this unusual setup where they don't have daylight savings time; it means during the summer they are on Pacific Time and during the winter on Mountain Time. It's already 3:30 when this occurs to me. It takes the wind right out of my sails for motivation to camp tonight with only an hour to get away from Blythe to find a spot. I check the motel situation on my phone: 36 bucks for a place that looks decent just around the corner! Too good to pass up. I head over for a long, hot shower; then a massive meal at the Sizzlers across the street (or, as they say in Boston, the Sizzlahs). They have an all-you-can-eat salad/soup/dessert bar. I do some serious damage to that thing. I stumble back to the motel I'm so full... another early night after watching the Raiders-Dolphins game on Sunday Night Football. The Patriots are on bye week...