Huachuca to Tombstone: a German Thanksgiving

Today is Thanksgiving... I've got that lonely feeling that sometimes comes with bicycle travel, when I'm in a shitty situation like fixing flats by the highway in the freezing cold while cars obliviously drive by, probably on their way to share the holiday with family... 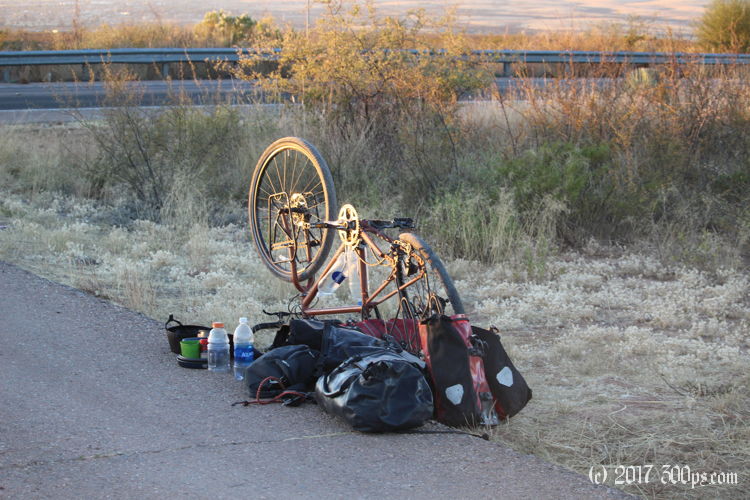 I didn't sleep well overnight, the cold periodically woke me up to remind me to keep my head under the sleeping bag to recycle the warmth of my breath. I'm up and packing before the sun rises so that I can get out of this semi-exposed campsite before someone finds me. I load up the bike and wheel it on its two flat tires down the rocky track, through the cattle gate, to the side of the highway where I can fix the punctures with the plausible excuse of just having stopped instead of just having camped somewhere I shouldn't have. Today is Thanksgiving... I've got that lonely feeling that sometimes comes with bicycle travel, when I'm in a shitty situation like fixing flats by the highway in the freezing cold while cars obliviously drive by, probably on their way to share the holiday with family. I resolve not to wallow in self-pity: it's Thanksgiving, and I'm thankful that I have the material and the knowledge to get the bike going again, thankful knowing that it will soon warm up, thankful that I'll probably be able to get breakfast up the road aways.

I find breakfast at a Safeway: a breakfast burrito and a coffee at the embedded Starbucks. I chat with a guy at the next table who is out for a ride on his motorcycle, carrying his little dog in a backpack. He says the first time he rode with the dog she was shaking like a leaf but ever since she jumps in the backpack by herself whenever he starts to grab his motorcycle gear.

The road curls northwest up into the mountains. I climb it slowly, stopping to check out parts of the old mine. No rush today.

Bisbee is a funky city, a mix of tourist trap, hippy refuge, and working-class town. A number of characters invite me to a Thanksgiving dinner being held at some kind of theater. One young woman tells me the story of how she toured the Oregon coast on a bicycle. I ask her if any coffee shops are open, she says she's looking for a cup herself and leads me through some alleys to a cafe that is, alas, closed. I thank her and resume the climb up the ravine out of the city.

Once I'm through a tunnel I've got a long descent into the next valley. I'm riding against the wind once I'm on the valley floor, a few more smallish climbs until Tombstone appears.

After getting water in Tombstone I consider my options. This valley is similar to the last in that it is mostly fenced-off ranchland and doesn't have a lot of vegetation for cover. I'm not really interested in a repeat of last night's miserable stealth-camping spot, so when I see an RV resort with a billboard that advertises tent sites on the way out of Tombstone I decide to stop and ask what the deal is. 25 dollars to pitch the tent, WiFi and showers, and a Thanksgiving dinner if I care to join them. I fork over the cash, I haven't had a proper shower since Nogales. I pitch the tent; take a long, hot shower; and go to the rec room where a buffet line of turkey with all the trimmings awaits. I share a table with an older German couple (who have a German shepherd for a pet), swapping travel stories. The food is delicious. This day didn't turn out so bad after all. Back at the tent I meet my neighors, another German couple visiting from California. I get into the sleeping bag fully clothed in anticipation of another chilly night.