In the early afternoon I run into two guys on dirt bikes heading in the other direction. One of them stops to ask if I'm okay. Sure, I say, heading to Chuckwalla Well. Is there any water there?... 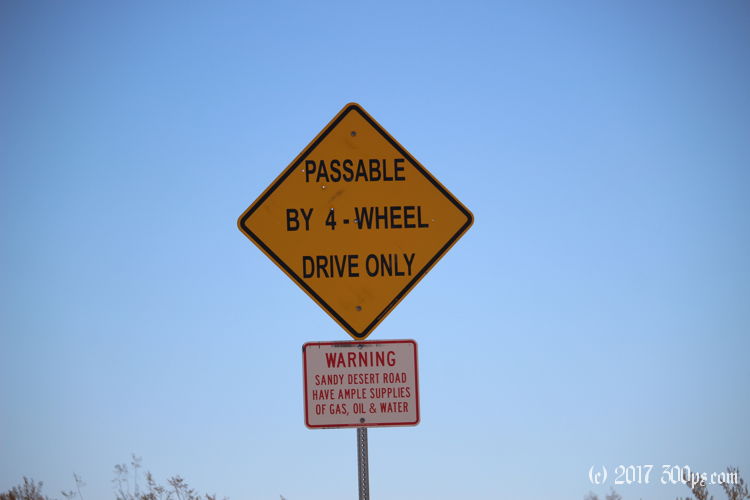 While I'm breaking down the tent in the morning a military guy pulls up in a jeep that says "Marines" on it. He asks about what I'm doing, says I'm crazy, and informs me that he is out on hunting patrol. They try to make sure no one is poaching on federal land. Oh yeah, hunting season. Hopefully I won't have to worry too much about it out here in the desert. In other parts of the country I find this time of year nerve-racking for back country travel and camping knowing that there are a bunch of people running around with guns looking to shoot something. He says people hunt deer and bighorn sheep up here. Hard to imagine either making this dry place their home. I ask him if he is a marine, he says no, he works for the Department of Defence. He wishes me luck than drives off into the gunnery range on some dirt side roads. I can see his dust trail for another hour or so as he zigzags up and down the bombing range side of the valley.

The ambient temperature is about what it was yesterday, in the low 80's, but today there isn't much cloud cover. When the sun is out it feels like someone is pointing a space heater at my face from three feet away, even if it isn't particulary hot around me. The microwave effect.

The early riding is encouraging. This plateau has some firm ground -- maybe a bit too firm -- the rocks make the back panniers sound like machine guns as I bounce my way down the trail.

After about 5 miles I start running into washes again. The thick sand has me walking, hauling the bike, without much hope for being able to stay upright on the edges of the road. At least I'm not climbing much today. In the early afternoon I run into two guys on dirt bikes heading in the other direction. One of them stops to ask if I'm okay. Sure, I say, heading to Chuckwalla Well. Is there any water there? They just came from there and they didn't see any. We get to talking about water options. They say that the campground at Wiley Road has "non-potable" water from a well. I assume I can filter it. One of them offers to give me some water from his backpack bladder but I decline, I've still got 4 liters, it's not an emergency yet. The plan I'm thinking of is to check out Chuckwalla Well, if there's no water I'll ride late to set myself up for a short trek to Wiley Road tomorrow. If there is water at the well, I'll camp there tonight. I thank them for the offer of water and head on my way. Those bladders don't hold much, not enough to bail me out anyways, and they need it themselves.

A few sandy and rocky hours later I've reached the turnoff for the well, ridden the mile to where the palm tree marks the spot, and I'm poking around looking for water. I don't see any after circling the tree and its thick underbrush. I'm about to bushwack my way into the thicket to get a closer look when I notice a pile of water bottles lying next to a bush 20 yards across the wash. On closer inspection they are unopened. I've got water! Not of the kind I expected. I set up camp, collect wood for a fire, and take a sort of shower with a liter of this fortuitous bounty. After dinner I'm too tired to bother with the fire, I just get into the tent when it's dark and read for a bit. I'm asleep before it's even 9pm.