I pull off the tire, patch a hole, pump it back up and remount it. I go about packing up the rest of my gear, then look over to see the front tire deflated again. Shit. I pull it off again, set about finding the leak, then a gust of wind knocks the bicycle over into the tent... 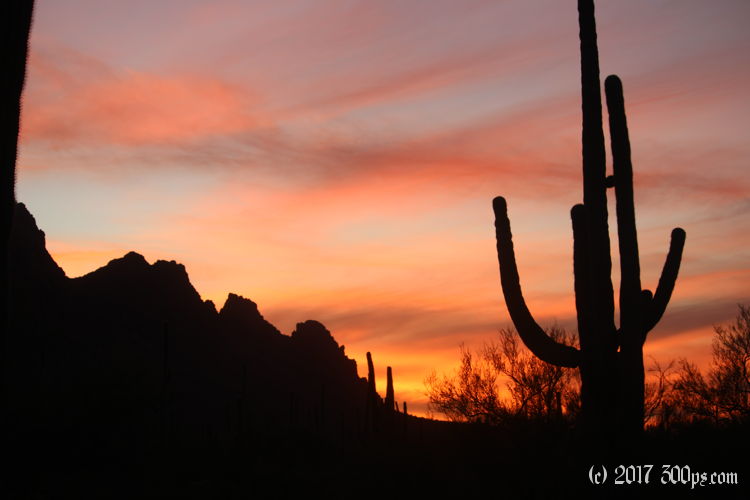 I get out of the tent to find my front tire flat. So begins a rough morning. I pull off the tire, patch a hole, pump it back up and remount it. I go about packing up the rest of my gear, then look over to see the front tire deflated again. Shit. I pull it off again, set about finding the leak, then a gust of wind knocks the bicycle over into the tent. The teeth of the front crank have torn a small hole in the tent fly. Double shit. Now I'm really cranky. Finally all my gear is loaded and the front tire seems to be holding, I ride a couple of miles out of the desert, onto pavement, and into an I10 travel-plaza kind of place. I get some water at the gas station and some breakfast at a restaurant attached to a motel. I speak Spanish with the waitress, the whole transaction takes place as if we were in Mexico, completely natural as if we were not in the U.S.

From here I could get on the highway (doesn't sound appetizing) or head south into the desert to try my luck on the dirt roads. There don't seem to be any direct routes through the desert other than the highway so I'll just have to kind of feel my way through it. I head south through Arizona City, a small town with a library where the librarian informs me they don't have electric outlets for public use. A public library with no public outlets? Never heard that before, I think she just doesn't like the looks of me. Admittedly I've got that rough-camping-in-the-desert look (and probably smell) about me.

At the end of the pavement a border patrol truck is idling with two ATV's on a trailer. Getting closer to the border now. He's the last human I'll see for the day. A dirt track takes me through a state conservation trust area, then I split off on a power line road heading east. It's pretty sandy, I have to get off and walk at most of the washes. It's a good thing I bought a gallon of water at the gas station because at this slow pace I'm unlikely to get through the other side to Tucson tonight. It's gotten quite hot again as well. The temperatures have been more reasonable lately but today the sun is beating down with all its desert force.

I get onto West Silverbell Road that runs roughly southwest. The terrain is more interesting, hilly with mountains in the distance, chollas and saguaros everywhere. I have to open and close a few cattle gates on this stretch. It's a bit tricky without laying the bicycle down, holding it with one hand while I try to unlatch the gate without letting it swing away, thread the bike through, relatch on the other side. When I get over a small pass I can see the northern Tucson suburbs. It's late and I've just picked up a cellphone signal so I might as well camp here where there will be no worry of being discovered. I pitch the tent off the road in a stand of saguaros. I hope none of these cactus thorns puncture a tire...