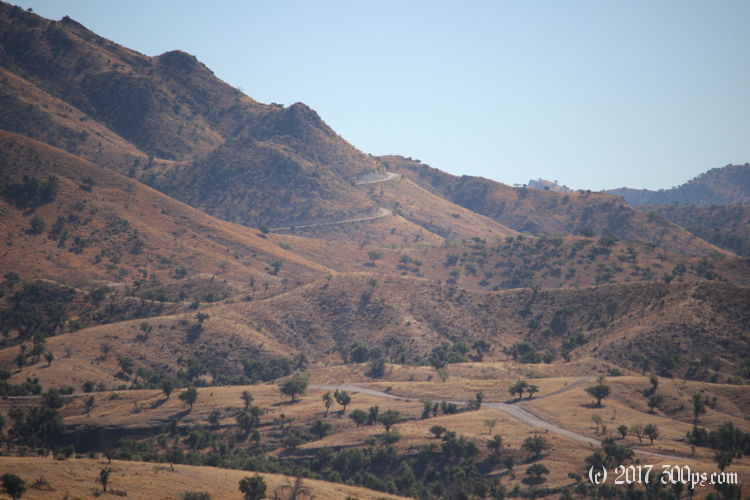 The kids who were partying last night are up early to go fishing. Some friends of theirs with boats have driven out here in the early morning, before dawn, to collect their buddies and launch the boats onto the lake. I'm camped right near the ramp so I hear it all. They are boasting about how they are still drunk... I've learned to hate weekends on this trip. If it was like a Tuesday I probably would have the whole place to myself and would have had a peaceful night's sleep.

It is god-awful frigid this morning. I start breaking down the tent, the freezing poles burn my fingers with cold. My neighbors invite me over for coffee. They light a roaring fire which draws me like a frozen moth to its warmth. I hang out with them for over an hour waiting for the sun to clear the ridge to the east. I learn a few things: Arizona has a law that no one can refuse water to someone who asks; and there is a "stupid driver" law that if you get yourself stuck in a wash during monsoon season you have to pay the bill for being rescued. Both sound sensible to me. I particularly like the obligation to provide water. Having been in a few thirsty situations it's good to know I have a right to go begging when in need.

I'm seriously unmotivated to start riding, I have to tear myself away from the warmth of the fire. I finish packing then go down to the lake to filter 4 liters of water. The sun is well above the ridge when I start climbing the hill to get back out to the main road. Just 10 minutes into it and I'm already hot, the fleece comes off, the neckwarmer goes back in the pannier. There must be a 40 degree difference between the temperature now and what it was 2 hours ago.

I get back on the pavement but it doesn't last long. Now I'm on Ruby Road heading into the Coronado National Forest. I see a coyote and some deer in the first hour but I can't pull the trigger on the camera fast enough to get a good shot. I've got steep grades on slippery dirt to contend with to get over the first mountain range, then a roller coaster across a valley, and more steep grades to get over another line of mountains. This area is beautiful. Golden grasslands, towering dark mountains, lush washes full of bright yellow cottonwoods, mule deer wandering through it all. I don't see many people other than the occasional Border Patrol truck and at one point I get passed by a group of about 5 motorcyclists all on dual-sport BMWs. If I had a GS this is where I would be on a Sunday as well. They must be having some fun.

The last climb is pretty painful. The incline is so steep I have to lower the tire pressure again to stop the back tire from skidding out with the combination of loose rock and heavy gear on the back of the bike. I just grind it out patiently. I'm not going up to 5,000 meters in the Andes, I tell myself, it has to end soon. And it does. The downhill on the other side is fun but periodically dangerous if I don't judge the speed correctly negotiating the hairpins. I come to a campground. This must be the lake area my camping buddies from this morning told me about.

I hit pavement thinking I'm home free but I've got some more climbing before the long downhill to Nogales finally starts. I'm riding into a pretty stiff wind so even the downhill isn't without its painful moments. I reach the highway and stop at one of those Love's Travel Centers for gallon of water, a liter of iced tea, and a big bag of Cheetos. Those curly little orange crunchy things have somehow become my guilty pleasure of choice on this trip. While I'm outside snarfing them down a guy comes up to talk to me. He's a rancher from the area I just rode through. He says he usually stops to talk to travelers going through his ranch; he says he's met some people on wild journeys like a group of people traveling the Great Divide on mustangs. That would be cool to try a trip like that on horseback. He gives me a few tips for back roads heading east along the border. I think I'll take his advice, after that beautiful road today I've got a taste for seeing more of this border region. But first I need a dose of civilization. The Patriots game has just started, if I hurry down to Nogales I can catch the second half.

6 miles down the access road along the interstate later I get a motel, wheel the bike into the room fully-loaded, turn on the tv, and crash back to indulge myself in some Brady-to-Gronk, Brady-to-Cooks. At night after a hot shower I go down the street for a bona-fide restaurant meal with tablecloths, real napkins, the works. I have a delicious eggplant lasagna with caneloni for desert. The bill come with an 18 percent service charge added on. I don't see that often in the States, I assume it means don't tip, but I feel vaguely guilty leaving nothing extra. I wobble back to the motel, looking forward to a night's sleep in a real bed.