Salton Sea: Day off (sort of)

The Salton Sea was created by mistake, in 1905, when flood waters overwhelmed a dike and gate system being built to provide irrigation water for the Imperial Valley. For two years the full force of the Colorado River flowed into the basin until they were able to stop the flow of water... 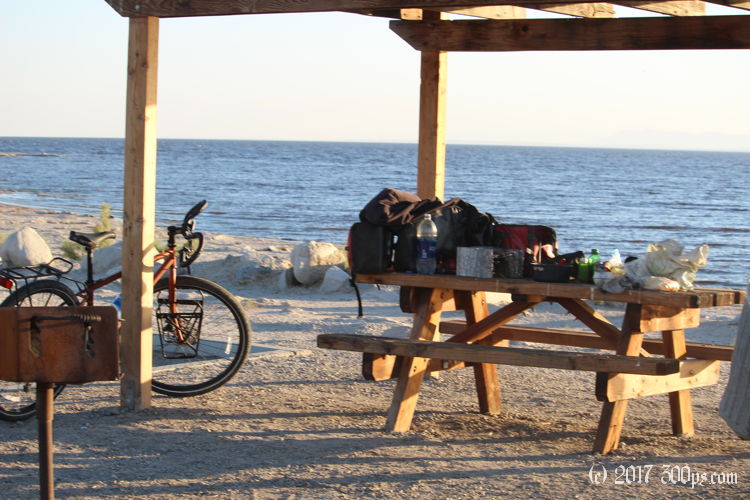 I'm up organizing things to take a shower when a ranger pulls up in his patrol car. He asks if I camped here last night and if I paid. I hand him the envelope with the $10 and say I was going to pay on the way out. He says the camping fee is $20; I tell him about the hiker/biker sign that says $5. He doesn't believe me, says that they don't offer hiker/biker sites. I mention that it's also on their website. He's not convinced and insists I pay $20, which I do, not wanting to get in a big stink over it. But it does change my plans: I was going to stay for 2 nights at $10 but I'm not going to pay 40 bucks when camping is so freely available in the desert. He leaves and I go take my shower. When I get back to my site I find a note on my bicycle seat saying the ranger wants to talk to me at the gate. I suspect this means he's going to admit his error so I plan accordingly: I ride out with just my 2 front panniers, with food and electronics, so I can spend some time at the library in Mecca. When I reach the gate I find out that I was correct, he went and read the sign; he returns me my $20 and I give him $10 for 2 nights.

Mecca is just like a little Mexican pueblo. Virtually everyone is speaking Spanish, the business are either aborrotes, taquerias, or carnicerias. At the mercado I get some money and some supplies. A woman has left her card in the ATM, I joke with her in Spanish that next time she should leave me the pin as well. The security guard is a cool older Mexican gentleman who watches my bike for me while I shop. On leaving I search for "coffee" in google maps and low and behold: there is a Starbucks about a mile away! I never would have guessed it. It's in a travel center sort of place that's on the road that comes up the western side of the Salton Sea (I'm camped on the eastern shore). So much for the library, I go to Starbucks to hang out and get on the internet. I meet a BMW rider who has put 130k on his 2007 R1150R, my kind of rider.

The Salton Sea was created by mistake, in 1905, when flood waters overwhelmed a dike and gate system being built to provide irrigation water for the Imperial Valley. For two years the full force of the Colorado River flowed into the basin until they were able to stop the flow of water. I find it to be a fascinating place, this accidental sea in the heart of the desert. It is such a departure from the surrounding environment. When I return from Mecca I make dinner and watch the sunset from a park area on the shore. I have it all to myself, there's not another soul arround.