Trilby Wash to Alamo Road: Into the Mojave

An older gentleman stops by my table to ask where I'm going. He said his son rode across country after he was demobilized following the first Gulf War. Everything went find until he was hit by a drunk driver outside of Barstow, CA -- his leg was broken in 18 places. Ouch.... 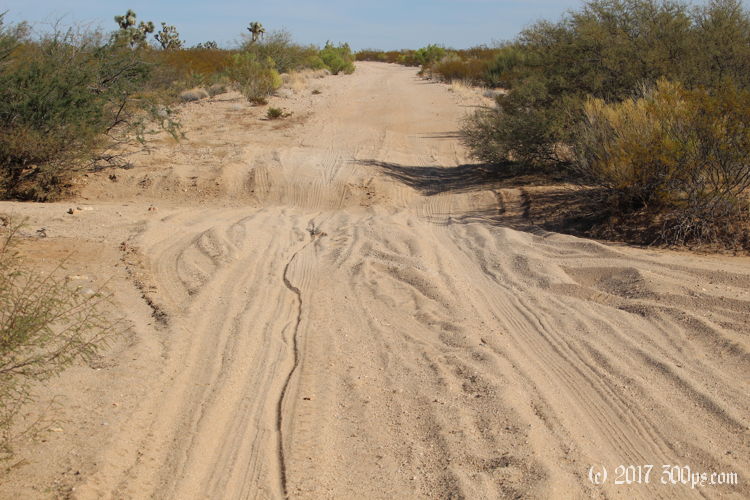 I roll from my campsite back to the road about an hour after dawn. I passed a gravel pit last night, I have to contend with a few trucks headed that way, kicking up big clouds of dust, on the 4 miles I have left to travel before I hit pavement near Morristown.

There isn't much of anything in Morristown. I've got to ride up 93 another ten miles to Wickenburg before I can get breakfast and shop. The highway is busy but it has a decent shoulder on this section. I am not reassured to see a ghostbike by the side of the road...

I stop at McDonald's... somewhat shamed to admit it, but it appeared first and I'm too hungry to go look for something else. I have the "big breakfast" which kind of sucks but it's a lot of food and that's what I need. An older gentleman stops by my table to ask where I'm going. He said his son rode across country after he was demobilized following the first Gulf War. Everything went find until he was hit by a drunk driver outside of Barstow, CA -- his leg was broken in 18 places. Ouch. I hate to hear stories like that.

I food shop in Wickenburg. The woman in line in front of me at the cashier's has a long and surreal argument about how she wants to return a bottle of mayonnaise that she didn't buy at this supermarket. The cashier just doesn't know what to make of it, eventually the woman gives up and leaves.

I head north on 93, tons of trucks, fine for most of the way until the shoulder basically disappears in a spot where it's only two lanes. In this configuration I'm getting buffeted all over the place by passing trucks. Fortunately I only have to ride about 5 miles like this until the junction with Alamo Road. I'm glad to see it! I won't see another human/vehicle for the rest of the day on this dirt road.

I dump the bike 3 or 4 times when the sand gets too thick. When I see sand coming I try to get speed up and hold the wheel as straight as possible; and just hope it's not too deep. Sometimes it is, that's usually when I wipe out.

It's pretty slow going on this road. I was hoping to make the lake but after 16 miles I give up and start looking for a place to camp. I still have a couple of hours of daylight and 16 miles to go to the lake, but what's the rush. I've got food and plenty of water.