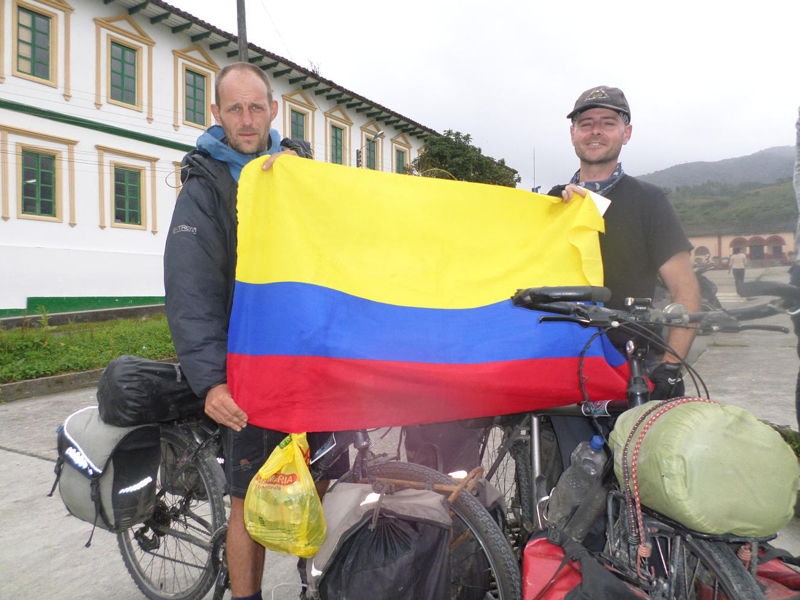 We packed up and left the church theater fairly early, arriving in Sibundoy for breakfast. While we were eating a woman came up to us, asking (in English) if we would like to do an interview with a Colombian television station that is filming a cyclist traveling through Colombia. We said ok and followed their SUV on the bikes to the town square while one of their crew was sitting on the spare tire of the SUV filming us. We ended up spending about an hour with them answering questions about the journey from Argentina and life on the road. Their project will be a television series airing in September that follows a cyclist as he travels from Bogota down through Ecuador. They were just coming from Mocoa so we got some good information on the road which is called "el trampolín de la muerte" (the trampoline of death). Past experience in South America has taught me that any road with "death" in the name is a good ride.

We picked up supplies before leaving town, knowing that we were not going to get close to Mocoa today with all the climbing to be done. The pavement disappeared about 10k out of town and the climbing got serious. It lasted about 20k under threatening skies but the rain never really got going like it did yesterday. Other than a few sections of mud the road surface was of good quality, unlike the "road of death" in Bolivia. After the first summit the road dropped heavily from 2,800 down to 1,400 or so, then lots of up and down until we called it quits around 5pm when we found some abandoned shacks on one of the turns. This road is one of those cliff hangers that make it hard to find places to camp with hardly a square meter of flat land to be found anywhere. The shacks turned out to be a good move though because it rained hard overnight. Dinner turned out excellent. We have developed a good system where Phil does the pasta and I do the sauce.