Putre to Canal Lauca: Climb to the high plain 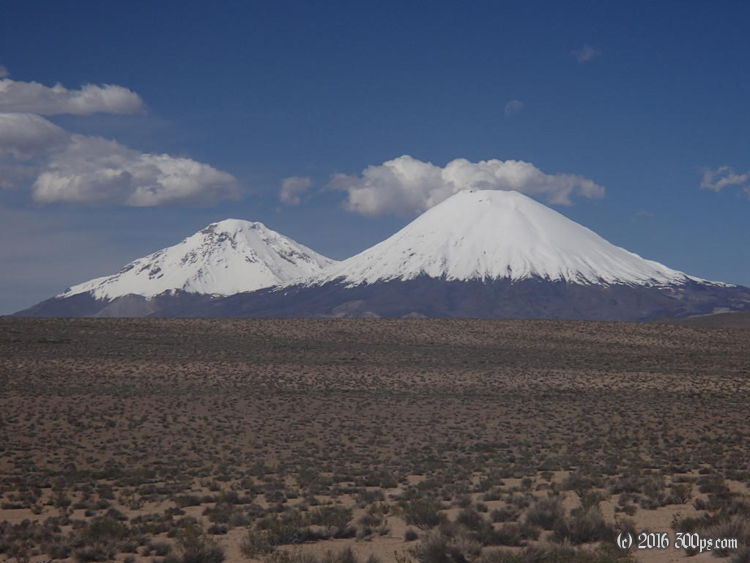 I was up early to shower and get organized, then was at the bank at 9 to change some of my meager supply of dollars to pesos to get enough supplies to get me to Boliva. The rate they gave me at the bank was surprisingly not usurious, I had figured that they would nail me in a small town like this. Then I went to three different stores to scrape together a decent pantry for the trip which will be at least 3 days, maybe longer.

The owner of the hostal kept shutting off the internet while I was using it. When I asked him why he said that people from the neighborhood kept logging on and slowing down the connection. I suggested that he change the WiFi password but I don´t think he got the concept.

I was finally on the road at 10:45, the climbing started right where it left off. Putre is a bit over 3,500 meters and it was a straight climb up to about 4,300 from there. There were no trucks passing me until about 1pm. They probably leave Arica early in the morning and it takes them until about 1 to get here. Once the climb leveled out I turned south off of the highway and onto the ripio road that heads towards the Salar de Surire. The turn meant that the tailwind I had had in the morning became a crosswind which in conjunction with the ripio slowed my pace way down. The landscape up here was dominated by two snow covered volcanoes off to the east.

I continued until around 5pm when I came to a canal that had some rock wall structures built along side of it. It looked like the only place I was going to find refuge from the wind so I quit early. I had climbed something like 5,200 meters over the last 4 days so better to quit early and not overdo it. I set up the tent inside one of the rock wall rooms and did some amateur masonry work to make the tent invisible from the road. As it turned out it was totally unnecessary because I wouldn´t see another vehicle until 10am the next morning.

The wind raged until about 9pm when it just died like someone just flipped a switch.