Mendoza to 5 kms north of Media Agua: A hot, flat ride through the Pampa with unexpected guests 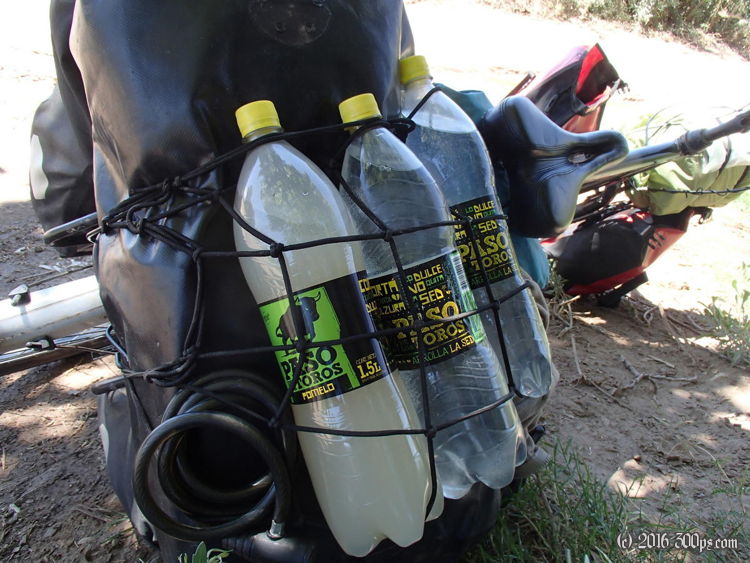 I had planned to get out early but it didn't happen. I woke up around 5am and shut the alarm off so I could sleep in, which I did until around 9. Breakfast, repacked all my stuff, and made my way down to San Martin for breakfast number 2. The bike was really heavy with all the food and 5 liters of water that I knew I would be needing in this hot weather.

After my second breakfast I kept going north on San Martin, figuring I would see a sign for San Juan or Ruta 40 at some point. I still hadn't seen the sign when a man in a pickup truck flagged me down and said I was headed into a dangerous neighborhood and had better change direction. I told him I wanted to get on 40, he showed me the way and 15 minutes later I was headed north on 40 out of town. Thank God for the cool people on this planet.

I wasn't on 40 for very long when a loaded motorcycle passed me beeping and waving. A couple of kilometers down the road the rider was waiting for me, his name is Juan from Tucumán. He was on his way home from Ushuaia, an 8,000 kilometer trip so far with about 1,000 left to go. He made mate while we traded stories about motorcycle and bicycle touring. His bike is a Honda Tornado 250, I can't believe he did the trip on such a small cc bike with all the stuff he is carrying. Juan is a retired provincial policeman, really nice guy, we hung out for about 45 minutes drinking mate. By the time we parted ways I was flying high after the 2 cups of coffee in Mendoza plus the half-liter of mate I had just drunk...

The rest of the day was hot, flat Pampa riding. So flat that over 131 kilometers I only climbed 31 meters (and I bet almost all of that was in Mendoza). The German/Swiss couple that I met near Futaleufú had warned me about this stretch. The German guy had actually been hit by a bus here, fortunately he escaped serious injury. Today was all about the mirror. I was glued to it, bailing out onto the gravel shoulder every time a truck came in my direction or there was a passing situation coming the other way. It really wasn't that bad as long as I was willing to just forget about trying to stake my claim to the road and just get out of the way. I wouldn't do this in Europe or the U.S., I would try to make people respect my right to the road. Here it is just a question of survival. Proving a point could be fatal; it's just not worth it. Not far from Mendoza I passed three dead dogs together who had been hit by a car or truck on the side of the road. South America is a dog lover's nightmare: there are strays everywhere, lots of them injured or with mange, or covered in ticks. Other than jack rabbits they are the only road kill that I see.

After a while I started hitting concrete sections that had signs for measuring water depth on the road. This must be a big flood plain for the Andes just off to the west. My friend in Mendoza had told me that this had been an unusually wet summer; I did not expect to see standing water on a highway in the pampa during the summer but there it was. The standing water brought some unexpected guests: mosquitoes, by the gazillions. The pampa doesn't have a lot going for it to begin with; throw in swarms of hungry mosquitoes and it goes to the top of the least desirable place to be list. Every time I stopped I got swarmed so I stopped stopping.

I reached Media Agua close to sunset. I rode into town hoping there would be a municipal campground. I stopped at a store to buy some water and asked the guy if there was a campground; he said no, way too many mosquitoes. Yup. He recommended camping near one of the two gas stations in town. There were too many people around for my taste and the town didn't have a good vibe so I kept going. About 5 kilometers later there was a section of sand with dunes where I could hide. I ran the bike in there as quickly as I could so that no one could see me leaving the road.

I had difficulty cooking my dinner because it was so big it wasn't fitting in the pots and pans but I finished every last bite. The mosquitoes were out of control; they were totally unimpressed by my Deet 30% spray. There were some big thunderstorms off to the south and west which meant the tent would be required in spite of the heat. The storms will probably miss me but I didn't want to get caught out in the rain in the middle of the night. The tent is frying but at least I'm safe from the bugs. I can still hear them trying to find a way in...