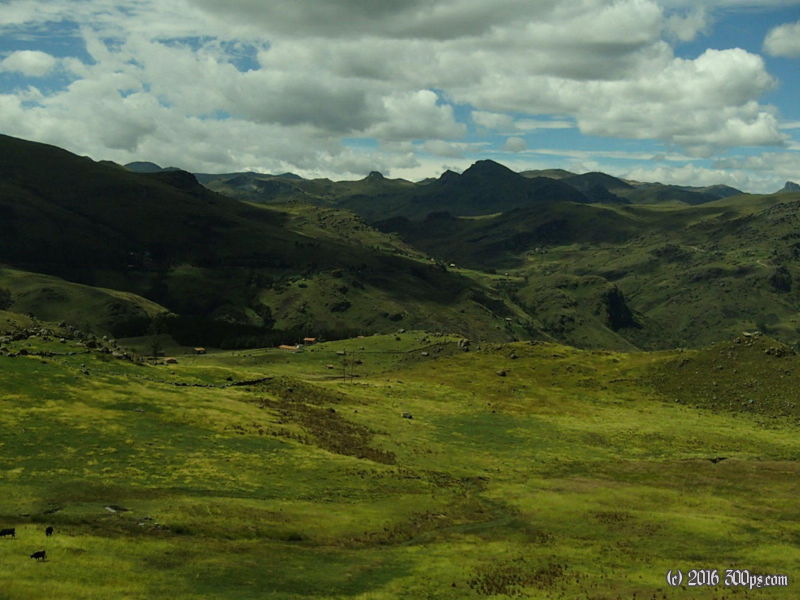 I had coffee at the hostal then was on the road at 8:30. The day started with a 500 meter climb on ripio, but with relatively good surface and grading. Things leveled out after the initial climb but the road became quite muddy. I think they are watering it down for the road construction. More up and down throughout the day until the pavement reappeared near Quiruvilca. Just before town it started raining hard, I haven't been drenched like that since way back before La Paz.

The rain let up once I got into the center where I spent 15 minutes talking to 4 cops about what I was doing. They said someone comes through here on a bicycle once a year or so. They said it was an hour to Huamachuco by car, which I doubted given the distance and the road, but I headed out anyways figuring I would camp somewhere along the way. Halfway up the climb leaving the city it started raining hard again. Then it started hailing. I hadn't put on my rain pants so it became quite painful with the pellets stinging my legs. The hail was accompanied by a 10 degree drop in temperature. When I reached the top at 4,250 meters I was freezing cold and soaked. I hid under the awning of a farmhouse for a few minutes to let things calm down. I continued on for another 5 kilometers then decided to get the tent set up before I got hypothermia... the only place I could find which wasn't swimming in water was the back end of a gravel pit. I set up the tent on a shelf a couple of meters above the sand to try and avoid all the water. I put on just about every article of clothing I have then made dinner under the awning of the tent. When it was time for sleep I buried myself in the sleeping bag to warm it up with my breath, the cold was bearable that way.