Cusco to 5 kilometers west of Mollepata: Finally on the road again 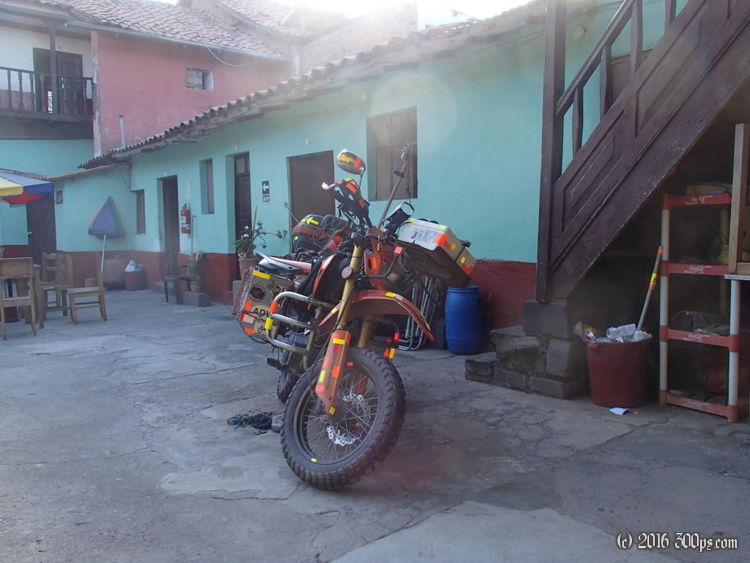 I had planned on leaving Cusco on Tuesday, but when I woke up that morning I felt awful. I had a touch of the turista which laid me low for a few days. I had thus far escaped such an illness on this trip, I was starting to think that my time living in Mexico had given me immunity. Perhaps to some extent, I did survive Bolivia without stomach problems, even when all the visitors to the casa de los ciclistas in La Paz were suffering with it. At any rate there was nothing to do but wait it out. Along with the sickness came a nasty case of road weariness, the first time on this trip that I was completely without motivation. I just felt tired of it all... After a few days I started to feel better. Raphaël, one of the French people I had done the El Choro hike in Bolivia with, showed up on Wednesday from La Paz. It was good to see someone I knew, we went for dinner and caught up on what we had been doing since El Choro.

On Thursday a pair of Belgians that Raphaël had met on the road came into town. We went out for an evening in Cusco along with a woman from Luxembourg that the Belgians knew from home. She is working on a volunteer project in Cusco for six months. Well my French sure isn´t getting rusty on this trip.... I went back to the hotel a little bit earlier that the others because I was determined to get off my ass and get back on the road on Friday morning. The hotel (or hostal) is an easy place to fall into lethargy. Hostal Estrellita is right in the center but it has a large courtyard set back from the road so it´s peaceful and feels safe and homey. The people that run it are very nice. Breakfast is even served every morning. I was definitely enjoying the break, even though I was sick.

I did finally get going on Friday morning. I had breakfast with Raphaël, had a long conversation with one of the guys that works there, then hit the road at 9:30. Leaving Cusco involves a 300 meter climb, at first I was worried about how I would feel after being sick and de-motivated but I slid right back into the climbing routine, enjoying the heat and sun. After the climb comes a descent back down to the same altitude as Cusco on the other side of the ridge, then a long flat ride before the road climbs back up over 3,700 again. On that hill I came upon a long line of trucks and cars waiting for construction to clear. I passed everyone and when I got to where the barricade was they let me through. When the climb was finished a huge descent started that would eventually take me from 3,700 meters down to 2,000. The road was blocked by construction periodically but never for more than 10 minutes. It was another of these river canyon roads that had me worried about finding a camping spot. I checked out a number of places that either turned out to have people nearby or were to hard to get into. I eventually settled on an embankment up above the road and out of sight of traffic but very close to the road. I will be hearing the trucks all night. Not a good spot, however as I started to make dinner I felt good about camping again. The stars were out in force with a bright Milky Way which lifted my spirits, the road weariness had been on my mind most of the day... I was wondering how much I should read into it and whether it had implications for changing my plans. I will keep going for now...