Ruta 40 km 3806 to Chilecito: Desert climb, some French, and a shower at last 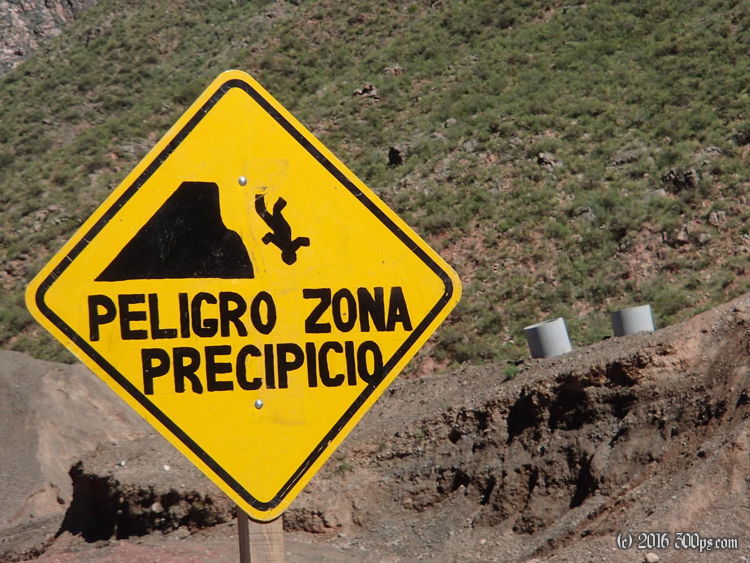 More critters creeping around my tent last night. No idea what they were. I did hear some horses coming down the wash later on but they were just out to pasture. I realized I had a flat as I was packing up. It was a big nasty thorn, I'm going to have to be more careful getting off the road in this desert, these plants are fully armed. I camped in an ant zone so I had to put everything in the tent, glad to see that the tent is ant-proof.

I fixed the flat and got on the road for the climb up the Cuesta de Miranda. They are working hard on this section so there were lots of trucks and heavy equipment around. The climb felt ridiculously easy, even though it was mostly ripio, after those high-altitude climbs of this past week. It was very hot but it was enjoyable to sweat and feel strong while climbing. On the way down the other side I met two guys from Montpelier, France. One was French and the other was an Israeli who had lived in Boston for 6 years. We spent a while talking about my trip, Argentina, and my days working in Paris. The Israeli was in the Peace Corps in Belize back in the day.

The road got really rough after this. It was the section that had been damaged by the recent rains, on one part with particularly deep sand I wiped out hard. I scraped my calf up pretty good but was otherwise unscathed. I was at least happy that the back rack held up through the bumpy sections. It was a long descent, probably about 25k, down to Nanogasta. I stopped for a coffee and some water, as I was sitting in the park drinking it an older gentleman came over and started asking me questions. He said he always tries to get their story when he sees a loaded cyclist. He said two had come through here last week. We had a good conversation then I was back on the road. It's always nice to meet people like this, it feels good after spending so much time alone.

Another hot 12 kilometers and I arrived in Chilecito. I went to the tourist office where a friendly woman showed me where a hostel was and some things to visit if I wanted to do some sightseeing. I went straight to the hostel and got a private room with private bath for only 100 pesos; best deal on a private room on the trip. I put down my stuff, took a shower (first one since Barrancas Blancas), put me laundry in the machine at the hostel (hadn't done laundry since Vallenar, Chile), and went looking for a rack solution, first to a bicycle shop where they had nothing, then to hardware stores to find a brace similar to the one I'm using on one side. No luck there either. I met another cyclist at the hostel: Thomas from Denmark who has been traveling for 5 months starting in Uruguay and visiting Brazil, Paraguay, Bolivia, and Argentina. He came down the 40 from Salta and was about to take a bus to Mendoza because he was tired of the desert. I recommended that he continue on a bus down to Neuquén as there is another 5 or 600 kilometers of desert after Mendoza before it gets interesting. He said I could get a rack in Salta no problem. That's about 700 kilometers from here... a long way to go with the thing hacked together. I could go to La Rioja but it's a big detour from here and I haven't heard good things about it.

Later I talked to two Chilean motorcyclist from Viña del Mar who told me that Pircas Negras was shut down. Must have been from last night's thunderstorms. They were shooting for Paso San Francisco, hoping it wasn't shut down as well. It turns out I hit the window just right for the pass, any earlier and I would have been waiting for days running out of food at Chilean immigration, any later and they might have sent me back to Copiapó.

I made dinner at the hostel and turned in early.