20 kms south of Pasto to Pasto: Short ride into Pasto for some days off 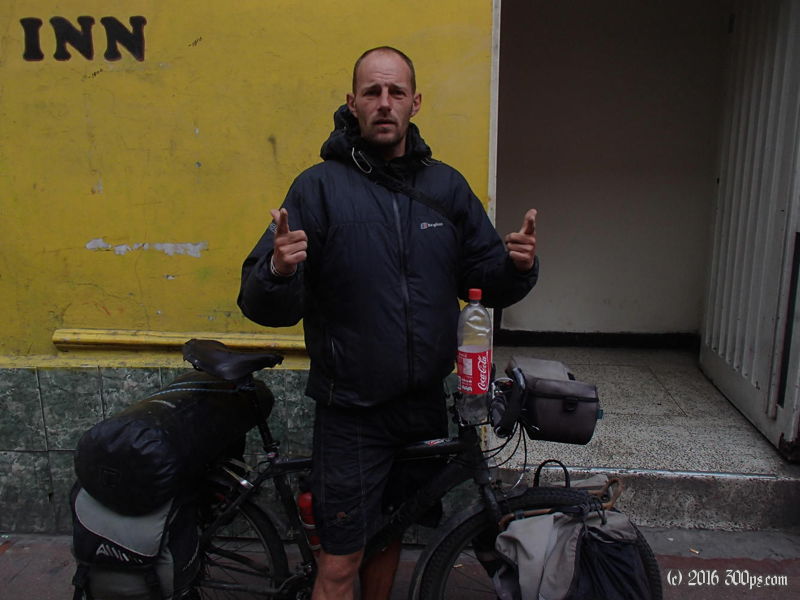 A kid who works at the store next to the gas station came over and peppered us with questions as we packed up in the morning. It was sunny to start but the rain kicked in just a kilometer down the road, making for a wet and cold final climb up over 3,000 meters before we started the descent into Pasto. We ended up climbing 400 meters on this last stretch... a lot more than I thought we had left when we stopped for the night at the gas station.

On the way down we met a German cycle tourist headed south. His gear was so clean and organized I felt like a hobo in comparison...

I haven't felt right since my illness in Cuenca, Ecuador so I decided to go the hospital in Pasto to get a checkup. They sent me for a battery of tests in a bunch of different locations in the hospital complex... I spent about 7 hours running here and there, then waiting here and there, before it all came back and I had a final chat with the doctor who told me he couldn't find any thing serious. He thought that it was just a severe case of food poisoning that has knocked me for loop and that the cycling on top of it is keeping me feeling below 100 percent. He prescribed some shots, some medication, and a couple of days rest. It would have been a nightmare to try and negotiate this process without speaking Spanish so I was grateful to be able to understand everything. I followed his orders with the rest, the shots were one per day for three days which I found out I could get at pharmacies that have nurses on call. Sunday was an adventure however as none of the nurses were working. I went to the public hospital but that place was a zoo (I really would not want to be sick there). I ended up going back to the private hospital where I had been treated before and got the shot for free there.

Phil set off Sunday morning but returned a few hours later when he got robbed at the edge of town. A bunch of teenagers with a knife stole his camera... He came back to the hostal to regroup and we decided to set off together on Monday. Hopefully traveling two-up will be safer...