20k west of Cochabamba to near Cutervo: And I thought yesterday was muddy... 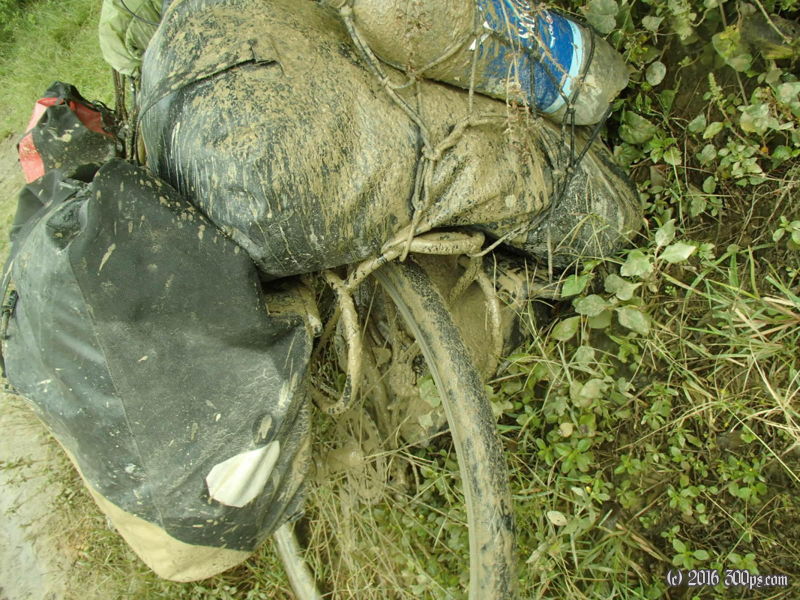 It rained hard all night and was still going when I got up. It sucks breaking down camp in the pouring rain. The road went from mud yesterday to mud 2 feet deep today. A kilometer down the road 3 contruction workers were having breakfast underneath the treads of an excavator. They told me that mudslides had blocked the road ahead in several different places. I continued on until I came to where the road was blocked, then spent 3 hours in a bus talking to a bunch of the construction workers who were stuck as well since their worksite was farther down the road. They work for a Serbian subcontractor on this highway project. They were very unhappy with their employer; they say they are paid less than the workers for the Columbian company which is running the project. They wanted to know all about Europe... I spent most of the time answering their questions. Later we got into some political and religous discussions. One of the guys was from Cusco and was the only one who spoke Quechua, I guess in this region it has pretty much died out.

When they finally cleared the road I said goodbye to the construction workers and headed out. There were more blockades down the road but they let me through on the bicycle. The mud just got ridiculous in places. I had to drag the bike through it with the mud sometimes reaching my knees. At least there was no traffic going through at the same time... they would have completely doused me from head to toe in mud. When I got near Cochabamba I stopped at a stream crossing to wash some of the mud off. I ended up just holding the bicycle under the waterfall it was so dirty...

I was out of food and hadn't eaten since last night so when I arrived in Cochabamba around 2pm I went straight to the nearest restaurant. It turned out I wasn't the only hungry cyclist in town: two Belgians, Ellen and Jean, were also there eating. I asked if I could join them and we spent the next couple of hours eating, drinking coffee, and talking about life on the road. They started in Brasil then went though Venezuela, Colombia, Ecuador, and now Peru (blog here). It was great to have a long conversation with like-minded people in English (they are Flemish). I didn't get back onto the road until 4pm... oh well, it was pretty much a lost day anyways in terms of riding.

The road from Cochabamba to Cutervo was paved, mercifully sparing me from any more mud. The rain continued however. I rode until it was dark to try and at least get some kilometers in before I packed it in and camped on a small clearing separated from the road by a thin line of bushes. People kept walking by on the road so I resigned myself to a cold dinner. This was one of those stealth camping sites where you worry about how loud you are chewing. It kept on raining through the night...everything is soaked at this point.