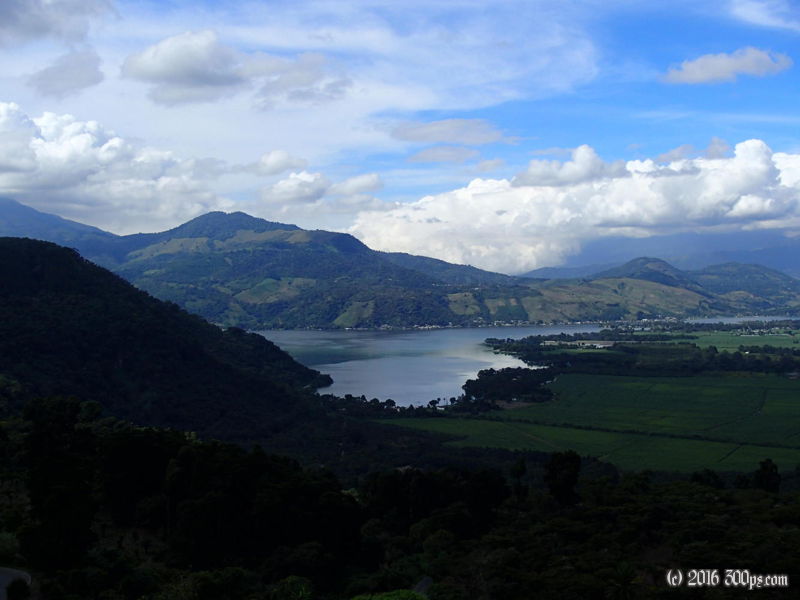 I was slightly less stiff when I rolled out of bed in the morning. Had a good breakfast at a truck stop kind of little town then enjoyed a long downhill before a long climb started. Near the top a cyclist on a road bike pulled up next to me to chat, he told me where to get off the road to go down to Lago Amatitlán. There was some good scenery on that rough descent but not quite what I was hoping for. By the time I had realized that I had missed the turn to go around the southern edge of the lake I didn't have the heart to climb back up, so I just continued on through Villa Canales. That mistake doomed me to a whole afternoon of city/highway riding. I ended up having to go pretty much right through the center of Guatemala City to get out to Antigua. The traffic was nuts but I have to say I enjoyed it. Leaving Guatemala City entails a climb up over 2000 meters before the road starts to drop towards Antigua.

The streets of Antigua are all cobblestones which makes for a rough ride. It was perhaps here that the right post of the back rack decided to go AWOL. Both sides of this rack have been broken for a while so it was just a matter of time before a catastrophic failure. I managed to get to a hotel at any rate. This rack is the poorly designed Argentine model that I have now broken two of. Since I won't be hitting Argentina any time soon at least I won't have to deal with it again. I'm actually kind of surprised it lasted this long, thanks to the supports I put on both sides it made it here all the way from Salta, Argentina; about 12,000 kilometers.

I took a day off to do a bunch of chores: I bought a new bag to hold the tent, a knew knife, some new gloves, found a new back rack at a place called Bicycle Co-op a block off the main square, and had the shop clean and repack the rear hub. For only 3 dollars the hub maintenance was a steal. They also put the rack on for free. I hope this new rack can take the weight...

Antigua is full of tourists. It also looks like there is a significant population of Americans living here full time. It always feels weird to go long distances with nothing but locals then run into a place like this where café lattes are sold on every other corner. The city is pretty however, all well-maintained colonial architecture set against the backdrop of a huge volcano. The roadrash on my face definitely earned me some looks. On a good day on tour I look mildly homeless so if you throw in some facial roadrash people start crossing to the other side of the street when they see me coming. Interesting how the Guatemalans don't seem to care, I've had nothing but friendliness and concern from them since the accident.

In the evening of the second day I met a Belgian-Canadian couple who are doing an around-the-world trip (not on bikes), they have a blog on wordpress. We spent a while chatting about traveling... We were wondering how many people cycle through Central/South America every year. I would guess about 100 do the whole thing, I've personally met about 20.

If I feel up for it I will head back out tomorrow, we'll see in the morning.