Buchupureo to 35 kms south of Constitución: All day on the coast 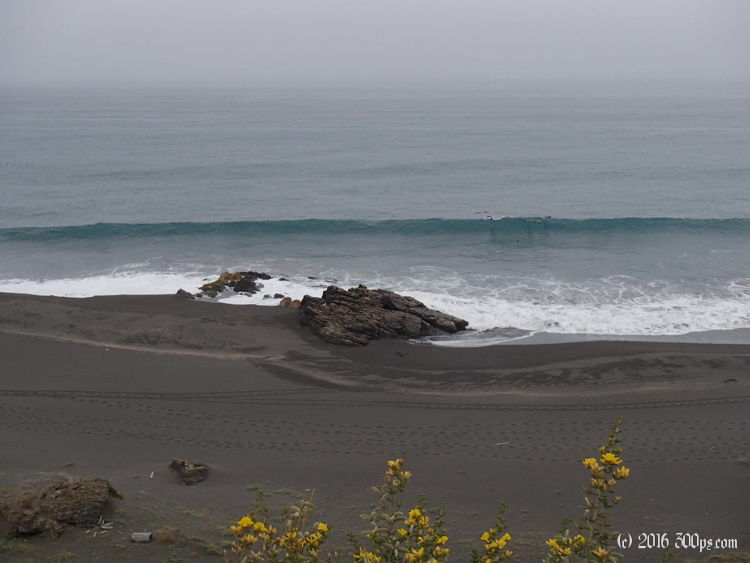 The day started out with some more of those 10-15% grades. The road is basically like this: climb up a 100-200 meter hill, descend into a cove, repeat. There was a 12 km stretch of ripio early on that had the same stiff grades, but the grader was out working on the road so the tires held pretty well even on the 15%. This was the best section of scenery for the day, with some really nice coves and just some abandoned houses. If the timing had worked out differently it would have been a great place to camp on the beach.

I didn't like the looks of Curanipe so I rode straight through and stopped in Pelluhue for a coffee and tried to get on the internet. The town plaza supposedly had free internet but it didn't work for me. More roller coaster until Chanco where I stopped again on the town plaza looking for internet. A guy waiting for the bus came over and talked to me. He works in the area but lives down in Concepción. He said sometimes it takes him all day to get there because of waiting for connections. I was telling him about the trip while he tried to pick the bike up, then he said: Viene pinchado! Oh shit... I had a flat on the front. I strongly dislike getting flats near the end of the day. No big deal in the end. I fixed it, got on the free WiFi at the plaza, and headed back on the road. I passed a few campgrounds but the tents looked squished together so I kept going. Everything was barbed wire until an open gate into a pine plantation. I headed in and found a good spot, pine plantations make for good stealth camping. As I was setting up I realized the eyelet that holds one of the fender braces to the front fork snapped off. For now I am just sliding the fender brace between the rack and the pannier, that holds it in place pretty well until I can find a more permanent fix.