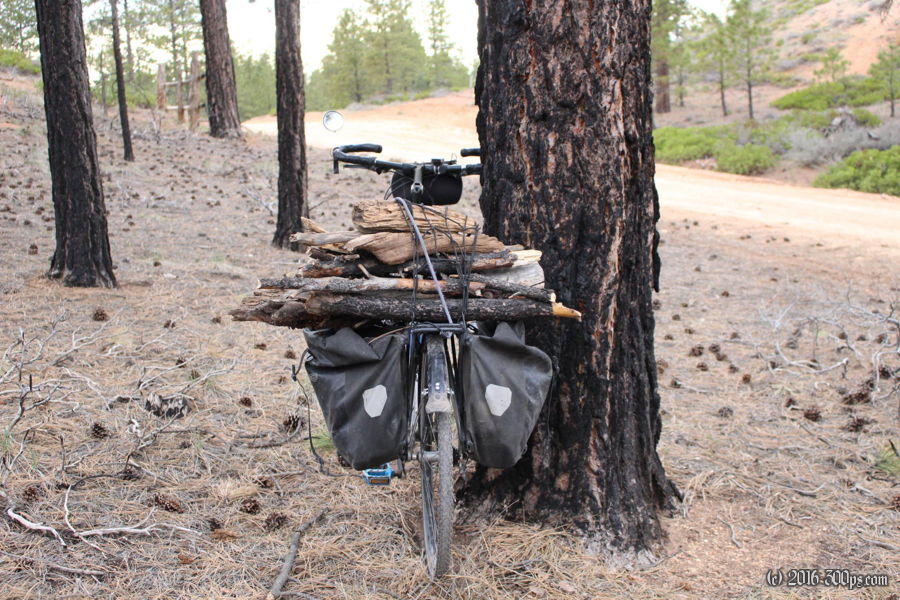 I pack up and ride down to Ruby's Inn for breakfast. I only ended up seeing one vehicle while I was camped there, it turned out to be surprisingly secluded despite the proximity to so much activity. There is a grocery store at Ruby's Inn but the prices are ludicrous. The restaurant was reasonable for breakfast however. If I had bought the ingredients at the grocery store and cooked it myself it probably would have cost the same.

The plan today is to see the sights. The wind is screaming from the south so I don't want to climb fully-loaded to Rainbow Point if I'm going to end up staying another night anyways; the solution is to get a spot in the campground. I find one easily enough, pay my 15 bucks (awfully pricy for one person on a bicycle given they don't even have showers), set up my tent with most of my gear in it then start riding south. With this wind it takes forever to do the climb. I stop at most of the view points along the way, the canyon is truly impressive. What is also impressive are the number of foreigners I run into: Quebeckers, French, German, Italian, Spanish (I even got to speak a little Catalan with a couple from Reus of all places), Japanese, etc... In total I think the foreigners outnumber the Americans.

I reach Rainbow Point around 4 in the afternoon. Surprisingly it's at over 9,000 feet altitude. After a few pictures I hop back on the bike and I fee like I'm teleported back to the campground with this crazy wind at my back. It's mostly downhill but on some of the climbs I'm doing over 10mph going up 5 percent grades. That doesn't happen every day. The fact that I'm not fully loaded must also be a huge factor, I'm just not used to riding the bike without 50 pounds of crap attached to it.

I want to have a fire but the park has a no wood gathering rule. Solution: ride back to where I camped last night in the National Forest and load up the bike with wood. When I ride back through the park gates the ranger gives me a look like "you are out of your mind". As I ride through the campground I get a lot of similar looks. It reminds me of when I was in Palenque, Mexico and I inadvertently took over someone else's campsite because the only thing there was a hammock. A guy showed up, an Argentine in his late 50's, and said "hey you're in my hammock". He had been out foraging for mushrooms. He was traveling with nothing but a hammock, foraging for his food. I thought this guy is nuts. I am becoming that guy.

At any rate I enjoy my fire and the dinner I cook on it. It's still windy at night which makes it cold. I think I might stay here another day to explore more of the park, still a lot of stuff to see.