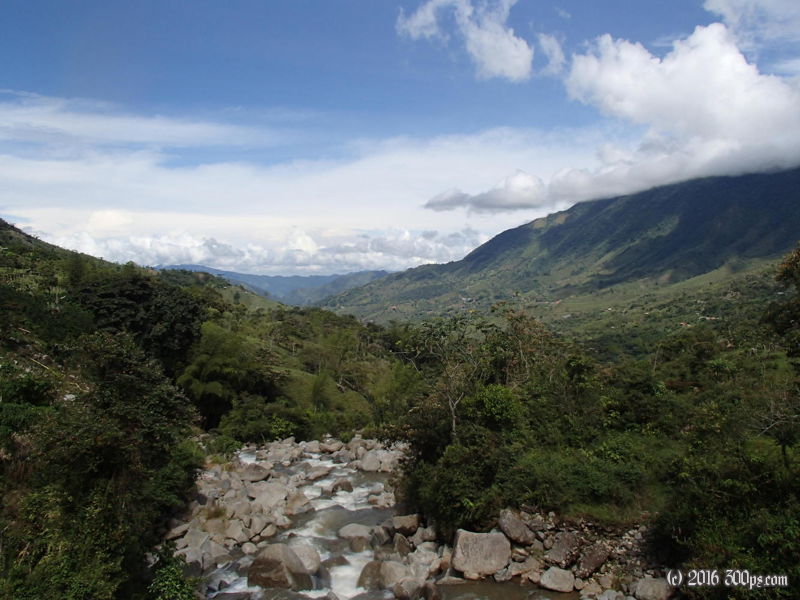 At 5am a massive rainstorm rolled in complete with lightening and ear-splitting thunder. There was no hope for sleep after that... I could hear Phil rustling around but I just stayed in my wigwam in denial until I figured I had best check out the situation. I poked my head out of the tent and saw that where Phil had put his tent was completely flooded - he had had to break everything down and move under the dormitory porch before all his stuff drowned. I walked out to the restaurant where the maintenance guy said he might be able to give us a ride up the road if we got ready quick; I booked it back to the dormitory to pack up all my stuff. When I returned with all my stuff ready it turned out that his boss wouldn't let him give us a ride so the rush-rush was all in vain. We settled for a good breakfast before heading off in a drizzle.

A guy on a motorcycle said the road was cut back down where we had passed a rock slide yesterday. The good news was that we had very little traffic coming up behind us because it took them most of the day to clear the road. Lot's of up and down, I kept wondering when the big climb would start because we kept giving back the altitude on the descents. At one point my crank arm just fell off as I was pedaling... a first for me. I stared at it in disbelief for a minute before I put it back on and tightened it as best as I could with the nose of my plyers... I don´t have the wrench that fits the cap that screws into the bottom bracket to hold the crank arm on. Another thing to deal with in Medellín. After a good lunch near Corconá we started gaining some altitude and not giving it back. It ended up being a 2,000 meter day to go from 700 to 2100 meters in El Santuario where we finished the day at hotel on the main plaza. All the gear was too wet to camp again tonight. For dinner we demolished an enormous pizza in what may have been record time. Tomorrow we should have a short, mostly downhill ride into Medellín.