Cañar to 5 kms south of Chunchi: My new speed: slow 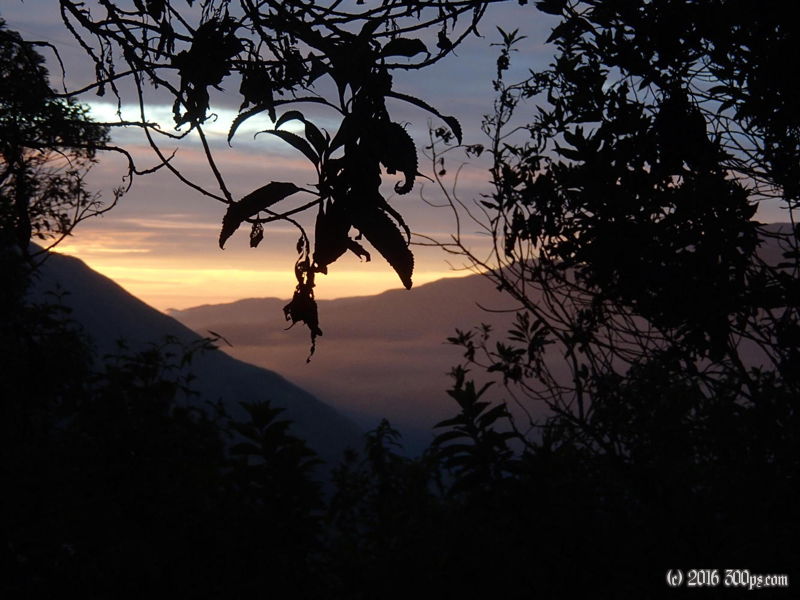 I went for a breakfast around the corner from the hostal; it’s a joy to have eggs, bread, juice, and coffee for breakfast in Ecuador instead of the heavy meat or chicken “breakfasts” of Bolivia and Peru. I was on the road none too early, about 9:30, and the day started with a 5 kilometer descent. In the town of Tumbo I stopped for a coffee at a place on the main square. I ended up talking to the woman who owned the café for about an hour and a half (so much for picking up the pace…). We talked a lot about travel and immigration. She had been to Mexico recently and had lots of stories about Ecuadorians trying to get into the U.S. One couple she knows from Cuenca had a nightmare experience: they paid 14,000 dollars each to some coyotes to take them across the border but they got caught by the Mexican border guards. The coyotes disappeared (with half of the money that they had paid them up front) and they ended up in Mexican jails before being deported back to Ecuador. Not surprisingly their stay in the Mexican jail was a nightmare, they were both sexually abused and needed lots of medical treatment when they returned to Ecuador from the lack of food and water while they were in jail. Ecuador appears to me to be a fairly wealthy country, very civilized and with a good standard of living, it’s hard to understand how it would be worth it to pay so much money and take such risk to get into the States.

She wanted to know all about what life is like in Spain and France. The conversation was thoroughly enjoyable but after an hour and a half it was time to get back on the road and try to get some distance in. A few kilometers down the road the rain started so I got the chance to try out my new rain gear that I purchased in Cuenca. The poncho works really well, it is about as good protection from the rain as one can expect while riding a bicycle. My VDO bike computer started freaking out in the afternoon, the altitude was jumping thousands of meters at a time, the computer was displaying grades of 99 percent (negative and positive), and the distance would reset every 20 minutes. I tightened the screws holding down the bracket, reseated the battery, and fiddled with the magnet on the wheel in an attempt to calm it down. We’ll see how it behaves tomorrow, I really like the thing so I hope it’s not permanently broken.

The day was up and down like it has been since I entered Ecuador. The roads have steep grades here (although not 99 percent, thankfully….). Around 5 I found a rare stealth camping possibility and decided to take it. It’s my first night camping with the new tent, so far so good except that it doesn’t have much of an alcove to cook in, something I always seem to need. It kept raining but not too heavily. I made dinner and set up for a night’s sleep in my new home.