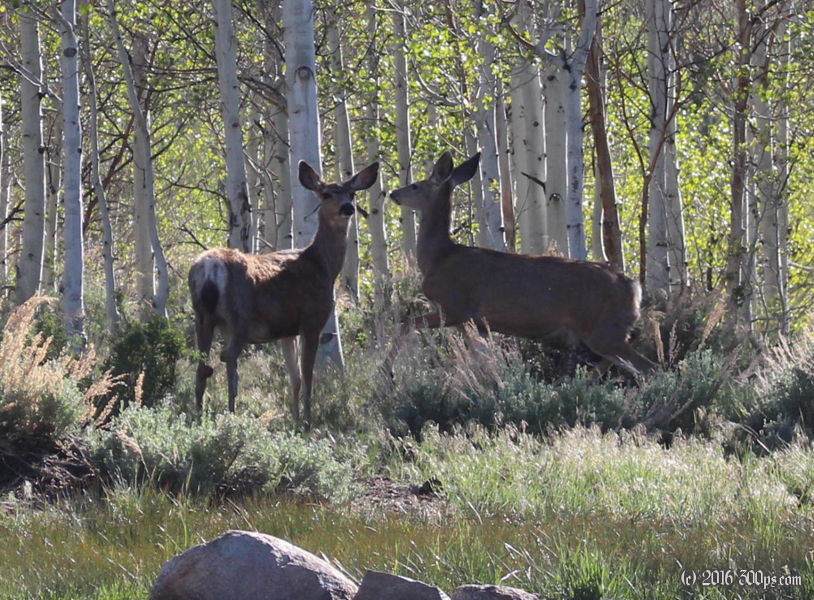 I roll out of the sleeping bag at 8am after a nice indoor sleep. Rebecca makes a delicious breakfast of scrambled eggs with veggies, toast, and coffee. No rush to leave as we trade camping and animal stories at the breakfast table. Rebecca is a botanist who spends a lot of time in the back country collecting samples so she has some good ones. I go outside for a walk around and end up chatting with some Mexican guys from Zacatecas who are working on the nearby lodge. We trade war stories about the drive through the desert from the border to Zacatecas, I've done it 4 times in my car and he does it twice yearly. I wouldn't dare do that ride on a bicycle... I'm very happy to have taken the ferry to Baja California and gone up to the border that way.

I finally get going well after ten after saying goodbye to John who is headed up Tioga Pass into Yosemite then eventually down to San Francisco. I've been thinking about that route as well to pay a visit to the Chaser of White Stripes but for now I need to get the bike sorted out and I'd like to do some more time in the mountains.

I have a tailwind to start but alas it is not too last. The wind is everywhere today: tailwind, crosswind, headwind, etc... I've got a big climb up out of the valley, about 1500 feet, then a big descent down to Bridgeport. I stop there for some shopping and some coffee. I get to talking to a couple, a British guy and a woman from Boston, who are out doing a long camping and rock climbing trip. We talk for a good long while about travel and cycling. The guy has done some long tours including crossing the Sahara twice. That is hardcore.

With the late start I was already resigned to not making much progress today. I have a long coffee break at a cafe where the I chat with the woman working there about cycling, then I finally crawl out of town into a vicious headwind. The road gets pretty tough on this section with long shoulder-less stretches, climbing, and wind. There is plenty of traffic including big trucks. Up over another 8,000 foot summit, it's already after 5pm, I start to scope out places for camping.

I pass a sign that says National Forest Campground on a dirt road. The big question is how far away it is. My map is no help and there is no one around to ask; in the end I decide to go up and have a look. After two miles of climbing I come across a two-track that leads down to a ledge. There are fire rings in a few spots, it's clearly not the campground but it looks like fair game to me. I find a secluded spot to set up. A bunch of deer are wandering around, studiously avoiding me. I have a long debate with myself about having a fire but eventually decide not to because it would be visible from down the valley. There were signs on the way in saying fire permits required, I decide not to risk it.

After a huge dinner I retire to the tent to escape the wind and what will surely be a chilly evening at this altitude. The sleeping bag will get some work tonight.