Nordhouse Dunes to Newberry: Into the Upper Peninsula of Michigan

Rain greets me not long after I cross the Mackinac Bridge into the Upper Peninsula. The first of a run of motels to stay dry at night. 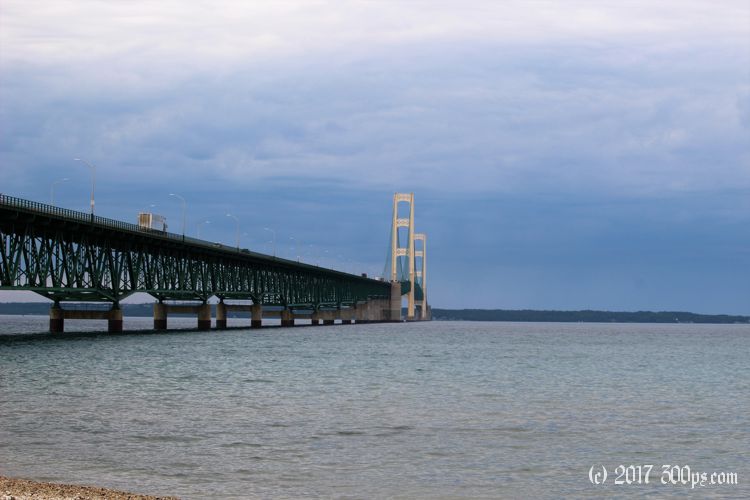 I use Steve's snow sled to drag my gear back to the parking lot, load up, and follow Steve to Manistee where he has offered to treat me to breakfast. After the usual two eggs over-easy, toast, and hashbrowns; I'm back on the road heading north up the Lake Michigan coastline.

This is a nice ride along some back roads and route 20. At some point I have to cut inland due to road work. I end up on the highway for the last 40 or so miles to the bridge. At a rest stop I guy comes over to me and says his wife recognized the sound of a K75S. I'm impressed. They used to own one until he crashed in W. Virginia, bike totaled and a broken collar bone. They have traveled extensively on motorcycles. Right now they've got a K1200LT touring bike. We chat about riding various places -- they've done a trip in the Alps -- and I get some tips for routes in the Upper Peninsula.

As soon as I'm over the other side it starts raining, and hard. I stop to put on the raingear. I was planning on going to see some falls up this way but I'm not up for a night of miserable camping. Instead, I aim for Newberry to get a motel. I'm just glad to be out of the rain for the night. Someone had told me that Yoopers (people from the Upper Peninsula, the U.P, ergo: Yooopers...) had their own unique accent. I get my first taste when I'm checking into the motel: the woman at the desk says: one baad? Excuse me? one baad? It takes me a second... oh, she's asking if I want one bed. Yes, please.