Pine to Mountain Home: 2 days without people then one day chock full of them

The cops are rousting someone in the Pilot parking lot. It's an RV that has a touch of "Breaking Bad" to it; maybe they think it's a rolling meth lab... 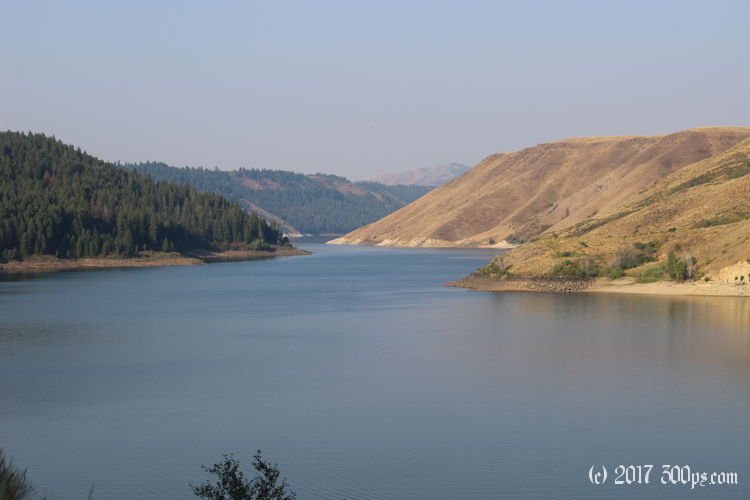 Around midnight last night an RV was driving up and down the beach looking for a place to camp. Thanks for waking everyone up, guys. They are Mexican, I can hear them arguing over where to stop. In the event they stop close to me then bang around for an hour getting situated. Hijos de la chingada.

An RV a couple of hundred feet down the beach is blasting "Highway to the Danger Zone" at 7:30am. What the fuck? Not only is it obnoxious to everyone else camped here, but should someone in an RV really be playing that song? I can't get out of here quick enough. I breath a sigh of relief when I'm flying back down route 20. This road is just as fun on the way down as it is on the way up.

I stop at the Pilot gas station next to the highway for coffee. I get to talking to a guy on an R1200GS, his name is Mike and he used to live in Boston. He is traveling and working at the same time. He gets an AirBnB place during the week so he can work, then he travels and explores on the weekends. He is doing one state per month, he started in May. He mentions Craters of the Moon (I've never heard of it), it sounds interesting. He is headed there right now but I'm too tired to tag along. I need to do laundry and have a proper shower today.

The cops are rousting someone in the Pilot parking lot. It's an RV that has a touch of "Breaking Bad" to it; maybe they think it's a rolling meth lab. Whatever the issue, the cops seem satisfied and eventually leave the guy alone. I go over and talk to the motorcycle cop. He's on an R1200R, says he loves it. He gets to take it home with him. I tell him about my adventures up in Boise National Forest. He says where I dropped my bike is the last tough stretch then it's home free to Trinity Lakes. Shit... I wish he hadn't told me. He also says that he tried to ride Crosscut Trail on his Suzuki dual-sport but found it nigh impossible; he dropped his bike and for a while was considering just leaving it there to get help, but he did manage to get out.

First thing is to wash my rancid clothes. That accomplished, I go to the public library for some internet time. Next a motel and a gloriously hot and overlong shower.

Sandra... blonde, beautiful smile, quick with a joke; traveling as well, heading to Arizona. 29 years old, when she was born I was still trying to drink myself to death in New Orleans. Coincidentally my anniversary of exiting that particular hell is in 3 days, it will be 28 years. An electric meeting, I gamble -- Je joue les rouges, coeur... Rien ne va plus. -- that it will end in desperate coupling, and it does.