Yes they told me not to hike the Aschenbach Trail (sounds like fun, let's go!). 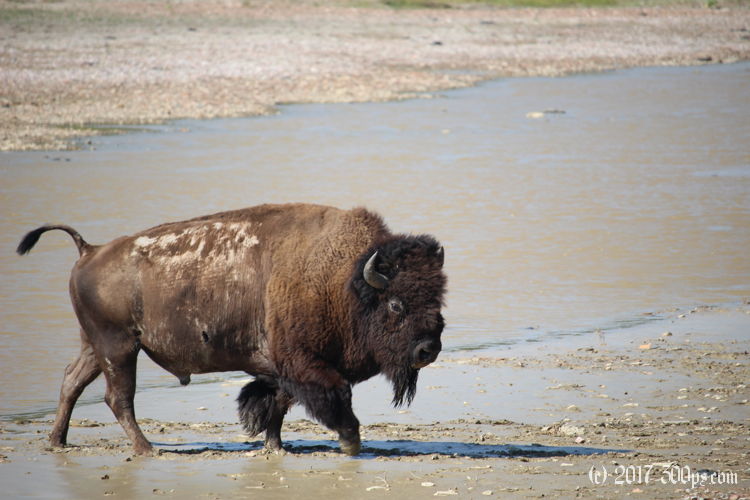 I ride out to the park entrance to purchase a park pass. Last night they were closed when I came in. I decide to buy the annual pass for 80 dollars; I'll have to hit a lot of parks to make that worthwhile. I didn't buy one on my previous bicycle trips out west because they charge a lot less for entry for bicycles and I never came close to 80 dollars-worth of entrance fees. While motorcycles get a slight discount, I'm more likely to hit that limit on this trip.

I ride into Watford City to get gas and have some breakfast at a "Mexican" place. Since there are a lot of Mexicans around, I was hoping it would be the real deal. No such luck. More like "Tex-Mex". Back at the campsite I swap out the headlight bulb on the motorcycle with my spare. Exact same behavior: no low or high-beam but high-beam flash works. It must be the switch. Shit, that's probably going to be expensive to replace. I've already got an oil-change service scheduled for Wednesday in Missoula so I'll have to wait until then to get any more info. In the meantime I'm on curfew: with no headlight I turn into a pumpkin at dusk. I've got the running light on top of the headlight so hopefully the cops won't give me any grief. Missoula, Montana is still like 900 miles away.

Alright, I'm ready to go hiking. There is an ominous-sounding sign at the Aschenbach trailhead (see photo). Add this to the young woman at the visitor center's admonition that I not hike this trail. I'm not buying that it's so bad, I think they are just trying to scare off the casual tourist. It is in the 90's so I leave prepared, however: 4 liters of water, compass, knife, plenty of food, detailed map on my phone. The trail is boxed in by the river on 3 sides and the ridge to the south, as long as you don't go over the canyon ridge I don't see how someone can get so lost as to need to be rescued...

The trail is hard to follow in spots because there are paths going off in all directions, probably from the buffalo. They are big enough and numerous enough to make some well-defined trails of their own. A few times I have to backtrack to get on the main trail. There are markers every so often, if it's been a while since I've seen one I know I'm off track.

When I get close to where the path starts descending the ridge to cross the river again I leave the trail to have a look at some buffalo. I make way own way down the ridge, following paths the buffalo have already made. There's a lot going on at the river: deer, buffalo, birds... everyone is escaping the heat by wading into the muddy water.

After a muddy river crossing (the water only gets up to my knees), I climb up the far ridge to where I surmise I can pick up the Sperati Point trail to Oxbow Overlook. It's a tough scramble in places, this western ridge is steeper than the others. I land right on the Sperati trail and follow it back to the end of the paved road. I haven't seen anyone since I left the campground. I was wise to bring all that water, I drank every last bit of the 4 liters I brought with me. Yes it's not a particularly easy hike with the heat and the poorly marked trail, but certainly not bad enough to be dangerous. Maybe there's a training issue with those military guys the vistor's center said needed to be rescued...

I stick out my thumb once I hit the pavement. The first car picks me up: a guy from Savannah, Georgia who is ticking off the few U.S. states that he hasn't seen yet. He hiked the Appalachian Trail a few years ago, finishing it in 5 months. And he has bottled water! It tastes great after a day of drinking over-floridated campground water. Back at the campground I set to making dinner straight away while I still have some energy left. I fall asleep to strong gusts of wind battering the cottonwood trees. It was very hot today but it cools down quite nicely at night with this wind, comfortable sleeping temperature in the tent.