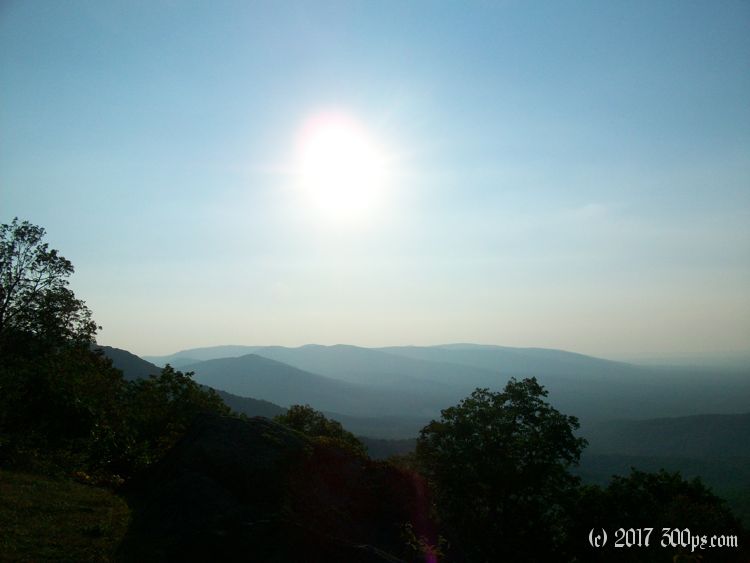 The deer are still munching around my campsite in the morning. I wonder when and how much they sleep. Well, there are worse nuisances than deer at public campgrounds, I consider myself lucky that I had no beer-drinking, generator-running, music-blasting "campers" to content with. I whip up a quick breakfast (I'm dying for eggs over-easy with bacon and hash browns but there will be none of that in this national park this morning) and hit the road.

A beautiful day awaits me on the roller coaster that is Skyline Drive. Nice, quiet riding, listening to the birds, enjoying the scenery. The tranquility is only broken by the occasional slow-moving car. The vehicles I come across are all respecting the low speed limit, thankfully. Some beep when they drive up behind me -- ostensibly to warn me that they are coming -- though I wish they wouldn't... I can easily hear them, no need for a warning.

I exit Skyline Drive in the afternoon, it has taken me a little over a day and a half to ride. The road passes under I64 then becomes the Blue Ridge Parkway. I hesitate for a minute, continuing on will probably mean stealth-camping as I don't see any campground options within reach on the Parkway, otherwise I could head towards Waynesboro to get a motel, it doesn't look to be too far away from the map. I've still got plenty of daylight so I decide to continue on the Parkway. The only reason I'm leery of the stealth-camping scenario is that I'm not sure what the rules are; and if Skyline Drive is any indication, the area is crawling with park rangers. It wouldn't be difficult for a ranger to do the math: lone cyclist with camping gear far from any campground as nightfall approaches, surely this guy is going to camp in the woods. I'm still pretty new to this camping-in-the-rough business, maybe I'm being a bit paranoid.

I'm so enjoying the cycling that I run out of daylight without spending much time thinking about where to camp. As a consequence I reach a point where I just have to get off the road and be content setting up behind a large rock outcropping next to a turn. It's kind of a lame place to camp, lots of brush -- and I suspect I'll pay for this lack of preparation with a case of poison-ivy -- but it is what it is. I make a dinner of beans and veggies on the stove and settle in for the night. I'm tired from all the climbing but feeling grateful for the nice ride today.