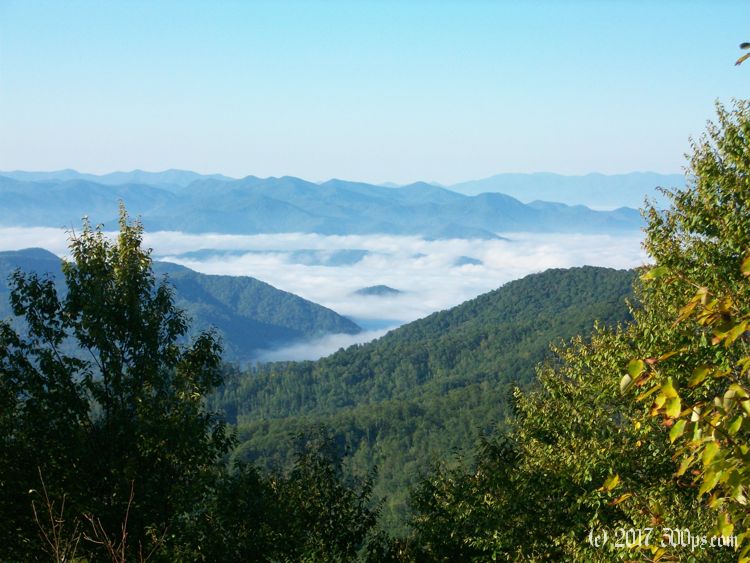 There it is: that big downhill I've been waiting for. I thoroughly enjoy it as my little revenge against all of the recent climbing. The southern end of the parkway drops way down; I'm descending for so long that I have to keep reminding myself to pay attention, it's easy to get going too fast for the tight corners. Some cars stack up behind me because there is little room to pass and not much visibility of what's coming in the other direction.

The parkway dumps me out route 441. I've already done this section west to Gatlinburg so in the interest of trying something new, I head south through the Cherokee reservation. I'll cross over into Tennessee somewhere further down the line.

It's a bit of a shock to be sharing the road with trucks and heavy traffic again. I have a few close calls with trucks shaving me with their rear-view mirrors... oh yeah, I remember that. The parkway was very enjoyable in that respect: no trucks allowed and very light traffic in general. I'm not likely to experience that environment again on my way to the west coast; at least not for 600-something miles. Wouldn't it be nice if one could go all the way cross-country on something like the Blue Ridge Parkway. Maybe someday.

Later in the day I pick a road heading west over the Smoky Mountains into Tennessee. I'm not on it for too long before I see signs for a campground called Cable Cove. It's "primitive", meaning no showers, but it's sparsely populated and has some nice sites that are basically in the woods. I set up and collect lots of wood for a fire. I just hang out, cook dinner, and enjoy the first fire I've been able to have for a while. Beautiful evening.