North of San Manuel to Little Gulch: into the Apache Reservation

Happiness is: water in the desert; a soft, shaded patch of grass to pitch the tent; a breeze to dry off after a swim. 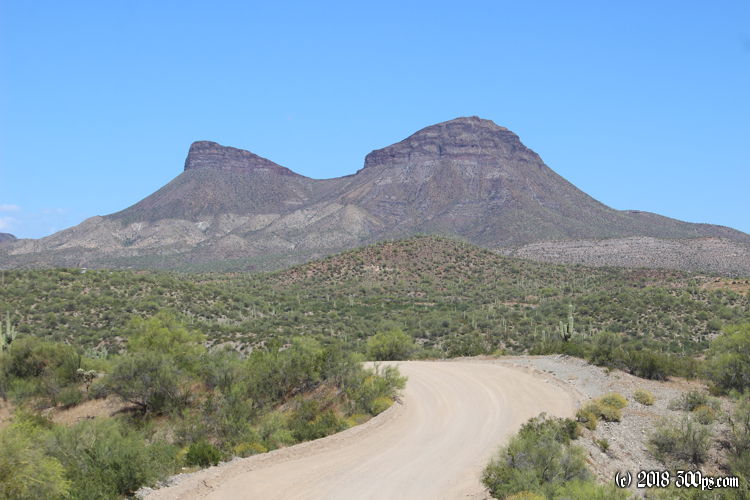 The sun baking the tent has me up and packing pretty early. I know there is decent coffee to be had not too far away in Oracle so I'm properly motivated to get on the road. I've got a steady but not too steep climb up the dirt paths to get to the Mt Lemmon Highway, then some road climbing to Oracle, about 7 or 8 miles total.

It's going to be a warm one. I'm sweating profusely by the time I reach the town. I head straight for the cafe: home-made corned beef hash with eggs over easy, coffee, and ice water. I think I'm happiest with the ice water...it tastes like the elixir of the gods.

After the leisurely breakfast I've got a long downhill on route 77, about 2,000 feet of elevation drop to properly digest my blueberry pie before I have to exert myself.

In Dudleyville I stop to load up on water. There is a park with some kind of community center in it that has a faucet. I sit in the shade to go over my plans. A few miles from Winkelman there is a dirt road that runs up into the San Carlos Apache Reservation, the idea is to cross through the mountains on back roads to get to San Carlos Lake and Coolidge Dam. The routing is sketchy. OSMAnd, the app I rely on for offline maps, doesn't show a route that will get me all the way to the lake. According to Google Maps I can get through but OSM has one of the roads ending with a 5-mile gap to the next one. I'm going to trust that Google has it right (a bit of a gamble, sometimes it's a toss-up between Google and OSM for who has the better data). Aside from the mapping issues, the other big risk is water. The path will be too rough to carry enough water from here to get me all the way through. I'll have to rely on finding a water source up there, which given the wet winter I'm fairly confident I'll be able to find. I've got 8 liters on the bike when I make the turn into the reservation.

Now the fun begins. The "road" has become a very rough two-track of exposed rock, loose stones, and pure sand in the washes -- all with very steep grades up and down the hills. For most of the afternoon I'm climbing up, over, and around hills, leading me in a generally northeast direction. The view tells me that I'll be in for some bona-fide mountain climbing tomorrow. If I keep going, that is. By 2pm I've got 6 liters of water left. I tell myself that if I don't find water in the next hour I'm going to have to give up on this route. Given my speed over this rough terrain, 6 liters is only enough to camp for the night and make it back out to Winkelman the way I came.

A little after 3pm I hit the jackpot: a small canyon with a stream running through it. The stream doesn't run continuosly, it appears to be going underground and popping up periodically, but in a bend in the canyon a 4-foot deep pool has formed complete with a sandy beach and a shelf of land with honest-to-god green grass to camp on. I couldn't ask for a better spot to pitch the tent. All the water I could need to drink plus enough to have a "swim" (more like just enough to submerge myself). I set up shop and jump in to cool off. It feels awesome.

I make dinner as the sun sets. Just me and the birds, lizards, and saguaros to enjoy the evening. I haven't seen a soul since I made the turn off route 77.