Redington Pass to north of San Manuel: get used to that 75lb bicycle, it ain't getting any lighter

The downside of buying light and fast bicycles: climbing on dirt with 40 lbs of gear starts to suck again. 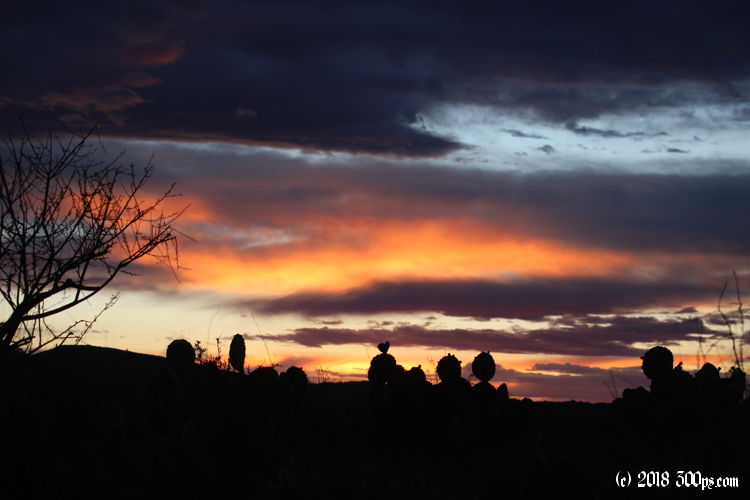 I slept pretty well after the sound of gunshots died off around 9pm. People must drive up here all the time to shoot... Being from the East Coast, this is something that I still find strange about the west -- shooting is a hobby that tons of people are in to. At random places in the desert I'll hear gunfire, and judging from the rapidity of the shots, the weapons are frequently semi-automatic. I find it unsettling. I wouldn't want to meet my maker at the hands of some yahoo who points his gun in the wrong direction at the wrong time.

By 8am I've broken down camp and am back on the road. Not exactly early but once the sun rises the tent turns into an oven -- there is no hitting the snooze button and lazing around.

It's amazing how quickly water becomes a problem in the desert. I filled up yesterday afternoon at a park on Tanque Verde, I had six liters on the bike before I started up the pass, and now after an hour of riding this morning I'm down to less than a liter. Fortunately I come across a wash that has some water in it, otherwise it would be a painful ride into Redington. I filter two liters from a small pool.

The road is a roller coaster for most of the morning. Since my last trip in France I've been riding light and fast bicycles; it's tough to get used to all this weight again, especially going up steep, rocky grades. I suspected this would be of psychological difficulty when I purchased my first light bicycle last year. I quickly got used to flying up hills and now I'm paying the mental price of comparing 20lb bike to 75lb bike.

Eventually I get to the long descent from the pass to the San Pedro River. This is fun, flying down steep hills trying to keep the wheels straight when I hit the sandy parts. I haven't seen any cars all morning so I'm free to let it run.

The road flattens out near Redington. I join Cascabel Road, a ride that I did once before on the way from Wilcox to Oracle. I know I've got a few hours of up and down until I reach San Manuel so I settle in to enjoying sweating in the heat. The sky is looking vaguely threatening to the west over Mount Lemmon.

At the Pinal county border the road switches to pavement. An enjoyable contrast to the morning's dirt. A bunch of Harleys pass me heading south. Do they know they are in for sand once they hit Pima County? Those things won't be easy to handle on that road.

I can see from afar that it's raining in San Manuel but it's gone by the time I get there. San Manuel is one of those sleepy desert communities that all seem to follow the same formula: a Dollar General store, a couple of blocks away a Family Dollar store, some closed businesses, a cafe that serves Mexican food, lots of retirees with camper vans parked in their driveways. I stop long enough to load up on water for the night and get a bag of chips. I head north out of town on ATV trails until I find a secluded hill to camp on. A few cows are wandering around. I make dinner in the tent then enjoy the sunset from my little hill.