La Dorada to somewhere on Ruta 45: Just like Texas 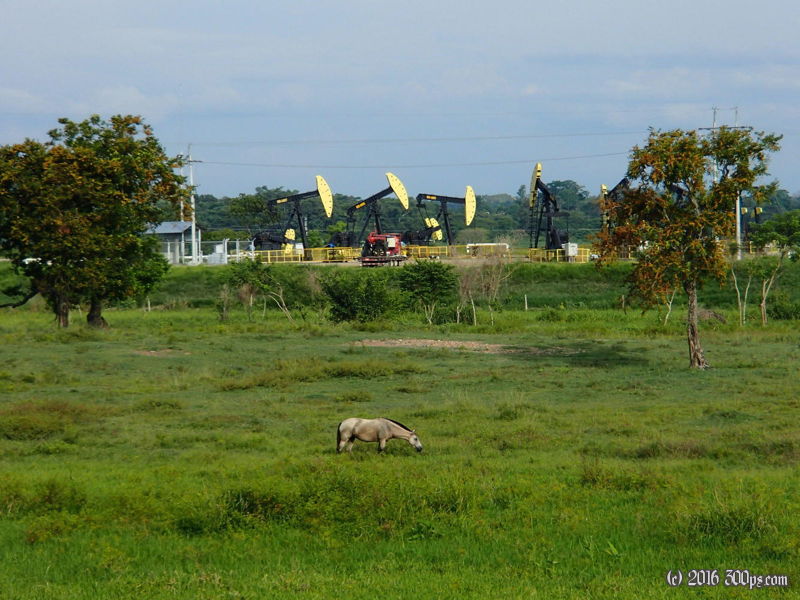 I had the usual 4 conversations with random people while getting out of La Dorada in the morning. One guy who stopped by while I was eating breakfast at a café had a great story about smuggling "coffee" into Panama on a boat they took from Cartagena. Apparently the police caught them in the San Blas islands but they got off with a big bribe. Not sure if it was true but he sure could spin a dramatic tale.

Today's ride might as well have been through Texas: hot, flat, oil derricks, barbed wire fences, cattle ranches, and the smell of methane in the air. In the late afternoon I came across the scene of a nasty accident: a bus hit an old truck carrying tires head-on. Unbelievably there were no deaths and only minor injuries. The traffic backed up for miles on both sides, fortunately I was able to slither through on the bicycle.

I wanted to camp but every inch of the land along this road has barbed-wire fences. I came to a small town late in the afternoon, saw a few ratty hospedajes, and kept going in the hope of something better. I ended up at a hotel with a pool and internet; I went for it after the girl came down quite a bit on the price. I've been spoiling myself lately with the hotel situation, I just haven't been up for the stealth-camping because it is hard work in these populated and fenced in places.