North of Río Pico to Ruta 40 Km 1556: The wind giveth and the wind taketh away 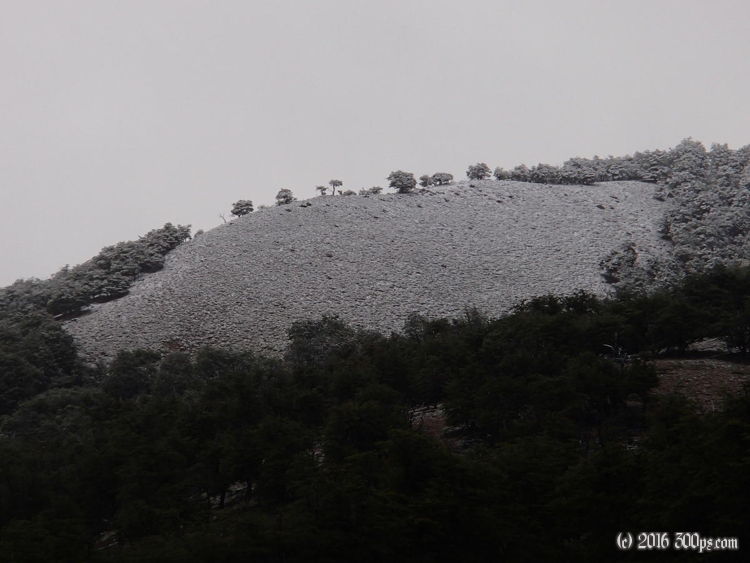 It rained from 8pm until about 8am. 150 meters above me it snowed some, and the mountains higher up were covered in the white stuff. I'm guessing where I was last night got a significant amount.

After oatmeal in the tent awning to keep out of the rain, I was on the road at 8. About 25 kilometers of ripio before Río Pico. About 15 kms before the town the big descent finally materialized. Down to the next valley was about a 500 meter drop. The road quality had improved here so I was able to descend a lot faster than the previous few days.

In Río Pico I stopped at an internet café for a few hours to take care of business. The guy working there was really cool, he set me up with a cat5 connection as they didn't have WiFi, gave me a cup of coffee, and gave me toast with homemade jam. I tried to update the blog but the connection was just too slow for pictures so I'll have to catch up on that later.

After the café I went for groceries and was back on the road. Amazed to find pavement on the road out of town! I wasn't expecting that. The first 20 kilometers were sheer heaven with pavement and the wind at my back. I was cruising along at 35 kph without much effort; it felt like warp speed after the last few days. They are working on this road so there were some long sections of ripio after the initial pavement. The wind was just screaming all day long so every time the road took a turn it affected my progress dramatically. It was interesting to be going 40 kph, then go around a turn and get pushed down to 5 kph. The rest of the day was like this. The wind helped more than it hindered though, and I was in Gobernador Costa before I knew it. The last section after I made the turn south on Ruta 40 was particularly fast, I averaged 41 kph over the 17 kilometer stretch. That has to be the fastest fully-loaded 17 kilometers I've ever done that didn't involve going down a huge mountain.

I was planning on staying in Gobernador Costa but I arrived so early I decided to see if anyone could fix my rack then maybe head on. I stopped at a shop to ask and they looked at me like I had three heads. One guy finally lightened up enough to tell me that they couldn't fix aluminum and recommended another place. I got back on the road and just went with the wind out of town headed south. This will be a very long stretch of nothingness... looks an awful lot like New Mexico. My luck ran out with the wind and I battled the last ten kilometers to keep the bike on the road against a vicious crosswind until I gave up and camped behind a big sand berm on the side of the road. Spell check doesn't like berm, berm is a word isn't it? Like a levee?

My distance for the day was 130 kms, which was about my average daily distance when I crossed the U.S. and Europe. It would be a complete pipe dream to expect to average that on this trip...