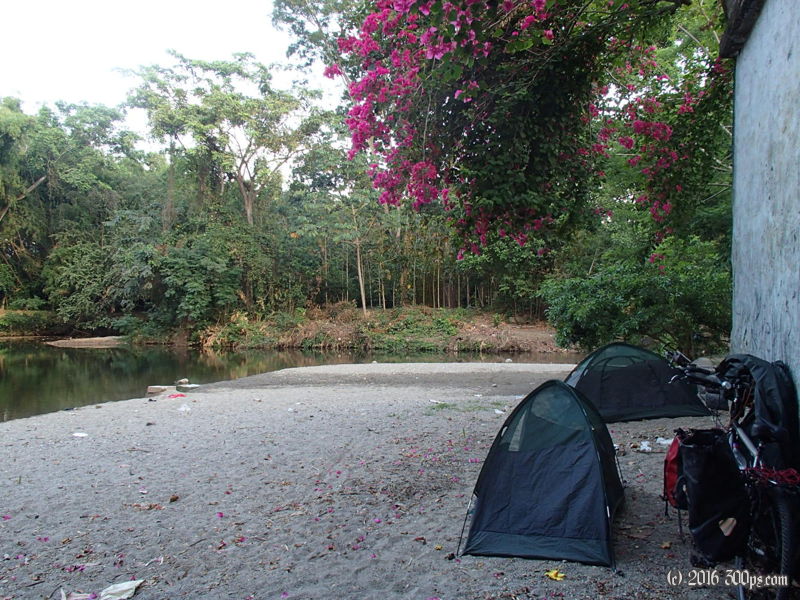 Not too quick to get out of town today. A leisurely breakfast then a stop at a Sodimac (like Home Depot) slowed things down. When I saw the Sodimac I just had to have a look to see if they had white gas. No deal. Strange how Sodimac sells it in Peru and Chile but not in Colombia. All was not lost however due to the discovery of a Dunkin Donuts lurking at the front of the store. I couldn't pass up on an espresso.

Lots of downhill for the first 40 kilometers. We had the road all to ourselves for quite a while because they had it blocked off for a bicycle race that was coming in the other direction. The cops just let us ride through until we were about 20k down the road when a particularly zealous young officer snapped at us to get off the road. We ended up waiting a half hour for the cyclists and the initial wave of traffic following them to pass. I spent the time talking to Ignacio from Medellín, a former dentist who has lived in Argentina and Miami. His son in law owns the rice farm that was right behind where we were standing. We talked about our travels and life in the States and Argentina.

We had another good 30k of traffic-free riding before the long line of trucks that had formed back near Ibagué finally caught up with us. A good opportunity to pull over for lunch, which was excellent by the way, and came with some free conversation with a family at the next table. As we were paying I chatted with the owners' 8-year old daughter about languages. Cute kid. We rode late looking for a place to camp, not easy in these cattle and farm areas where everything is fenced off. A couple of attempts to camp failed when people told us it wasn't a good idea here or there. A security guard told Phil about a spot - we went but a guy there just said no. A few minutes later we asked someone else and he said yes, good enough! We carried the bikes down some stairs to a nice beach on a river bend. Dinner of sausage, potatoes, peppers, onions, garlic and pasta. Some kids came by later to dive in the river with flashlights looking for something, I'm not sure what, until about 9 when we retired.