Río Sucio to Ansermanuevo: Down to the Cauca valley 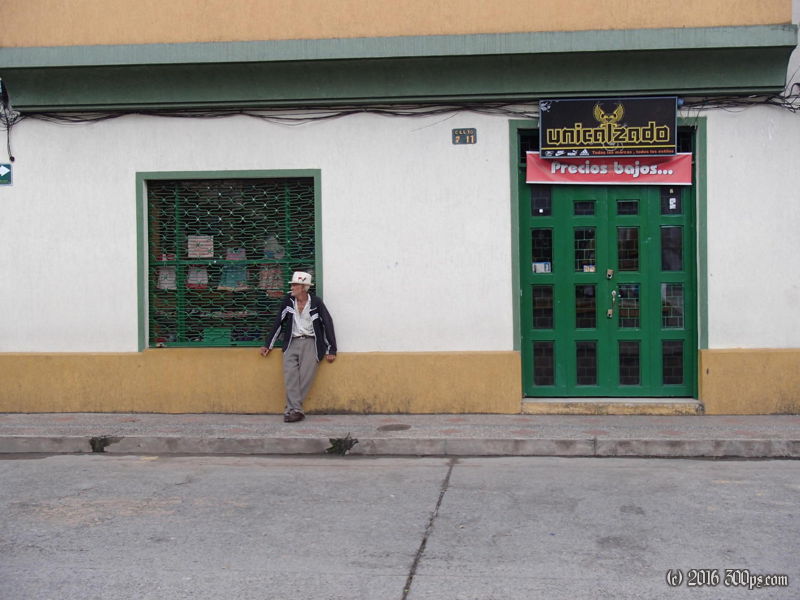 I got out on the road at 9am after breakfast and coffee on the square. A taxi driver set me straight on how to get out of town heading towards Guática. There was about 600 meters of climbing before a big drop from 2,000 meters altitude down to around 900. On the way down I stopped in a town called San Clemente where I spoke to a whole bunch of people, including 4 national police who kept joking that I needed to bring Timberland boots back from the States for them.

I stopped for lunch when I hit 1,000 meters; as soon as I got off the bike a wall of heat hit me. The wind from the descent had been sparing me until then. For the rest of the day it was good and hot while I kept following the Río Cauca, even as it spun off the main road because I wanted to avoid the main highway between Pereira and Cauca. A cop tried to talk me out of the road because of the dust but it really wasn't that bad, I just needed to stop and put a bandana around my neck for those moments when the big trucks passed me.

This whole area seems to be a major sugarcane producing region. There were endless fields of it. The "trenes cañeros" (sugarcane trains) were quite impressive - tractor trailers hauling 5 connected boxcars down the dirt road. No wonder there was washboard, those things must be unbelievably heavy. I was looking around for a place to camp but everything that wasn't thick sugarcane was fenced in with barbed wire. I considered camping on one of the alleys through the sugarcane fields but decided that would probably not be a good idea with all the activity going on around here. In the end I made for Ansermanuevo where I got a cheap hotel. As I was booking the room a guy came in who said he had seen me on the road and wanted to know all about what I was doing. He has his own business selling motorcycle parts so he travels extensively in Colombia, wherever he travels he checks out the local tourist sites. He was chock full of information on things to do in different parts of Colombia. He seemed let down when I told him all the places I'd been in this country but had hardly done any tourism... what can I say I just plain suck as a tourist (and I'm happy that way!).

When I went out for churro a little while later I noticed that there was a heavy police and military presence in town. I didn't think much of it until the news came the tv while I was eating dinner to say that there had recently been a shootout in Ansermanuevo that resulted in 5 wounded, including a police officer. Oh well, grabbed a delicious pastry on the way back to the hotel and going to make it an early night (as usual).