Bus to Puno to get my passport stamped: 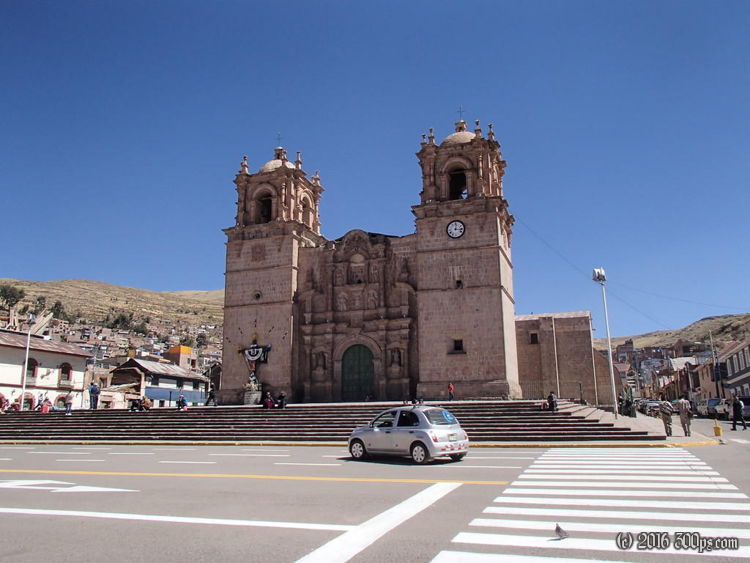 I took advantage of having the first good Wifi connection in a long time to make some calls to the States. It felt funny to speak English and as I thought about it I realized that I hadn´t had a conversation in English since I met the German couple from Heidelberg back at the Salar de Surire in Chile on March 22. That has to be a personal record for not speaking English.

Today was about getting my passport stamped. Puno is almost due south from Juliaca so I decided to take the bus down there instead of ride and have to backtrack on the same road. The only thing I dislike more than buses is backtracking. I had breakfast and caught a minibus from Plaza Bolonesi to Puno. I walked to the Plaza de Armas and found the immigration office about a half block north of the plaza. I filled out the immigration form then was ushered into an office where a woman asked me a bunch of questions about how and where I entered Peru. The exit stamp from Bolivia was causing her some consternation: the Bolivian border agent had written "30 days" on the exit stamp, which makes no sense because it´s an exit stamp and not an entrance stamp. I told her that the office had only been open for two months and the agents there were obviously unclear on the concept. Finally she agreed to stamp my passport. She asked me where I was going and I told her I was headed to Ecuador by bicycle. She asked how many days I wanted and I said 90. She shook her head, gave me a look of complete disbelief, then wrote 180 days on the stamp. O ye of little faith.... Next stop was to change my remaining Bolivianos into Peruvian soles. Surprisingly they didn´t rip me off with the exchange rate, I was afraid Bolivianos wouldn´t be worth much here.

My business concluded I went for a walk down to the lake and had lunch. I saw a number of Western tourists walking around, this place must be a draw. After lunch I caught another minivan back to Juliaca. I spent the ride exchanging funny faces with a 6 month old baby on the seat in front of me. It passed the time, I forgot to bring something to read...

Back in Juliaca I went for an ice cream and had a long conversation with a woman on the street who wanted to know what I was up to.

My string of good luck with food ran out tonight. I picked a restaurant at random and the chicken was totally undercooked. I sent it back but the cook must have been on a smoke break because I didn´t see it again for 15 minutes. Oh well can´t be a perfect feast every night...

Tomorrow I will be back on the bike headed for Cusco.