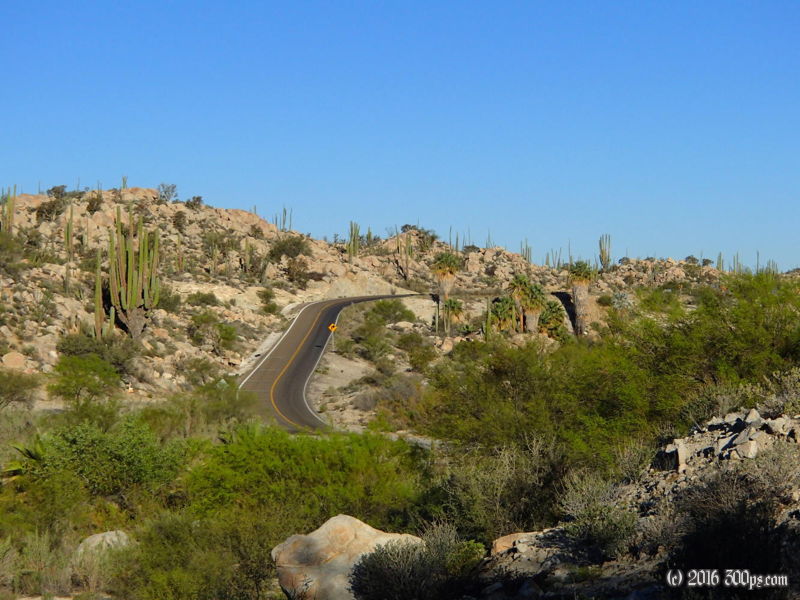 I'm up at dawn. After a stretch of camping I'm programmed for that. It's too early for anything to be open in Cataviña so I leave the key in the motel room door and start pedaling through more cactus and boulder scenery. After 15k the landscape changes back to barren valleys and mesas. At 50k or so I come to the town of San Augustín, mostly abandoned except for an rv park/restaurant and a couple of ranches. I get a coffee and sit outside on the steps talking to a 15-year old kid whose family owns the rv park. He went to school in San Quintín but now he is back and wants to stay here. We spend a while talking about my trip, then the conversation turns to the US and how to work there. I tell him some of the horror stories I've heard from other Latinoamericanos about crossing the border. I hope he doesn't try it, too many things can go wrong these days... He tells me about a cyclist who died of natural causes a few years ago in Chapala, he went to sleep in his tent and never came out. When I get to El Rosario I Google it, the cyclist was a Brazilian named Valdo Vieira.

Later in the afternoon the ride becomes a race to get to El Rosario before nightfall. I knew setting out today that I would have at least 120 kilometers to get there, with the wind cranking up my opinion on whether or not I'm going to make it changes frequently. Around 4 there is a pretty big climb so I pick up the pace and stop taking breaks. At 5 it gets downright chilly when I'm in the shade of one of the mountains. Out comes the fleece. I think I'm on the last downhill but I'm not. I feel defeated at the prospect of another climb, but I grind it out into the teeth of the wind, consoling myself with thoughts of a warm hotel room and a dinner in a restaurant. Tumbleweeds are flying across the road. I get to a summit then finally comes the big downhill into El Rosario. A day that ends with a long descent into a town with services is a beautiful thing, I really put it all out there today. I get a hotel room, take a shower, and go straight to a restaurant to devour enchiladas and chiles rellenos. The restaurant manager greets me directly in English but I play dumb, forcing him to speak Spanish with me. I find it annoying that people just assume I don't speak Spanish from the color of my skin. I wish they would make the effort to at least find out before resorting to English, I can't imagine ever speaking Spanish to someone in the US just by the way they look, I would feel quite rude. Ni modo... I enjoy relaxing in my nice soft bed before drifting off into a luxurious sleep.