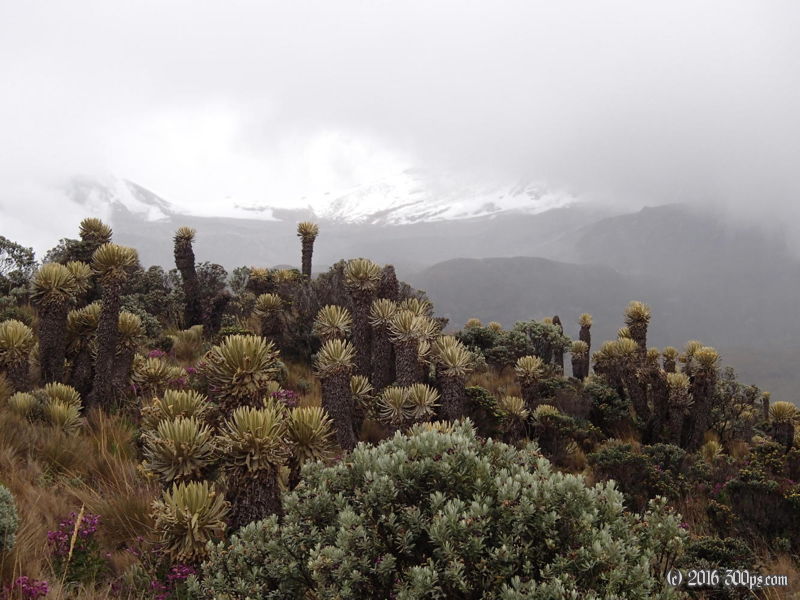 I got out of the tent at 7 to find the surrounding mountains covered in fresh snow. The air had the pure, fresh smell that comes with a recent snowfall. At my altitude it had rained all night from about 10pm to 6am but never strong enough to keep me awake. I felt much better this morning after having a good rest to acclimate myself to the altitude.

I was only a kilometer into the day's climb when I was passed by an SUV with a bunch of people in it. They clapped and yelled buenos días as they went by. Another kilometer up the road I ran into them again parked by the side of the road. With them was a park ranger on a motorcycle. He came straight over to me as I rode up and said that the road was closed 10 kilometers up due to the gases being emitted by one of the volcanoes. I spoke to him for a good 15 minutes trying to find an alternate route over to the other side but the end result was that I could go back from where I came or leave the park further south towards Pereira. Neither sounded like a good option but I didn't have any choice, he was adamant that there was no way to get to the northern side of the park. He said that he himself had gotten sick from the gas twice while riding his motorcycle through there. I decided to ride up at least as far as the refugio to get a good look, I had climbed this far so I might as well see what was there.

The ranger's name is Fernando, he met me at the refugio and gave me a tour of the place. He also made me a hot chocolate and a grilled-cheese sandwich which were much appreciated. We ended up hanging out and chatting for a couple of hours. He had lots of stories to tell about the park, such as how the Uribe government sent government forces up here to route out the guerrillas a few years back. He said they killed almost all of them and retook control of the park. When I was ready to leave Fernando gave me directions for exiting the park towards Santa Rosa, a town that I had ridden through a few days ago on my way to Manizales. The directions consisted of lots of "take a left at this fork, then go through this cattle gate, etc..." I was suspicious that I would recognize these places and I turned out to be right: there were a bunch of forks he hadn't mentioned where I didn't know which way to turn. It didn't help that the place was completely fogged in. I asked at a farm house and later a truck full of cops that went by, at both places they said I was going in the right direction, but in the end I somehow managed to wind up on the same road I had been on the first day when I took a wrong turn. I first noticed that something was up when I saw a repair job that someone had done on a big hole in the road. I had remembered thinking that that was a dangerous fix using such big rocks to patch a hole. I figured it must not have been the only place where they had made such repairs but later I came across some broken colored glass that I remembered seeing and then I knew I was back on that same road as the first day. Oh well, might as well go back to Manizales as I was going to head north anyways.

A bunch of people recognized me from the first day and asked me how it had gone up in the mountains. I ended up lending one of them a few patches for his motorcycle tire. The last hour became a mad dash to get back to Villamaria before night fell. I rolled into town just as it was getting completely dark, went to the hostal where I had stayed before, grabbed a room, then rushed out to get some dinner.