5 kilometers west of Mollepata to near Cachora: A close call, clawing back the altitude, and those Dutch with their Rohloffs 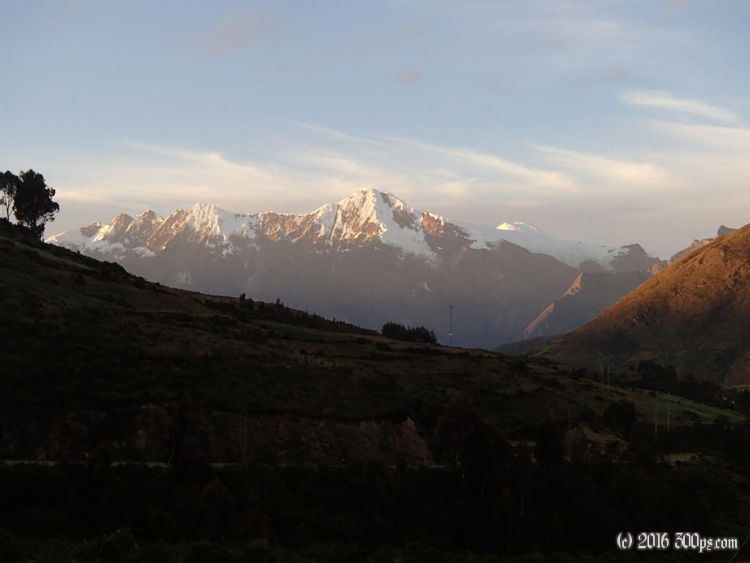 It was actually warmish last night at this altitude. The temperature difference at night between 2,000 and 3,500 meters is dramatic, I didn´t even get into the sleeping bag until around 4am.

I was on the road at 7am to finish the last of the big descent from yesterday. I camped pretty close to the bottom point on this road, I dropped another 100 meters then began a 900 meter climb that took me up to the town of Cuyahuasi.

During the climb a truck almost sent me on the great cyclotour of the sky: I was midway through a small straightaway on one of the switchbacks when I see a truck come barreling around the corner, completely taking up my lane. I was ready to ditch the bike and try to run up the embankment when the driver panics (I could see his face) and the truck swerves over to the embankment on my side, his front left wheel goes down into the culvert, then he smashes into a concrete barrier which sends him careening over to the other side of the road, teetering on the downhill wheels. I don´t know how the truck didn´t fall on its side. I jumped off the bike at that point and scrambled into the culvert. Luckily for Noname (my bicycle) and most of my worldly possessions the truck did not flip over, instead it ran into the guardrail on the other side of the road and continued limping along downhill on a couple of broken rims while scraping the rail. My blood was pumping. I took a moment to collect myself and continued on.

When I reached Cuyahuasi I stopped for a late breakfast and some supplies. Breakfast in Peru and Bolivia is basically lunch, the only difference is the time of day you eat it. I had chicken with rice and potato served with coffee. I´m not complaining, it was good. When I came out of a store after buying water I found a little girl with Down´s Syndrome hugging Noname. They must have bonded deeply while I was gone because she did not want to let go. I let them have their moment until a woman came out of the store and peeled the little girl off.

After a quick descent out of town the climbing started right back up again and would continue until the end of the day. About halfway up I ran into a Dutch cyclist coming in the other direction. I think he said his name was Elmer but I must be getting it wrong, it just doesn´t sound like a Dutch name to me. He is on a 5 week journey from Lima to La Paz. We had a long chat about what to expect in each other´s respective directions and about touring in general. He has a Rohloff, that makes 5 for 5 for the Dutch cyclists I´ve met on this trip, they must love those Rohloff drive trains in Holland. We talked about the pros and cons... I´m still not sold on it. Maybe I´ll feel differently when I reach the ninth cassette of the trip.

I stopped for some rice and a few other things at what I was guessing to be the last store for a while as I was getting close to the top of the pass. They offered me a bed for the night for 4 dollars but I really wanted to camp. A few kilometers later I passed 2,000 meters of climbing for the day as the sun was setting so it was the perfect time to stop. I found a brilliant campsite in a stand of pine trees above the road: a nice little clearing with flat ground, protected from the wind by the pines, out of site of the road, and as an added bonus it smells wonderful due to the mint plants everywhere. A vast improvement over last night´s spot... I´m back up at 3,800 meters altitude so the temperature fell off a cliff as soon as the sun set. As I was making dinner I was thinking about how little food I waste on tour, apart from the occasional vegetable that goes bad on me everything gets eaten. Touring is an exercise in efficient living: I only buy what is strictly necessary and I eat and drink every last bit of it.