Iquique to 5 kms south of Huara: Climbing away from the ocean 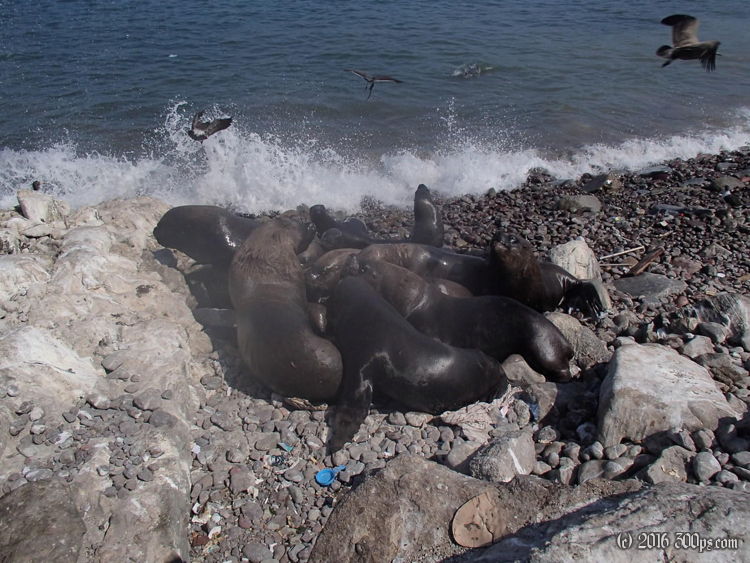 Another late start leaving from a city... There was some sort of bike race on the costanera, they had the road shut off to traffic, but I didn't really understand what was going on. Some people were really trying and moving fast, others were just kind of moseying along.

I got lost on the way out of town and ended up at the fish market. The place was crawling with sea lions, pelicans, and seagulls. While I was there a guy came out twice with a bucket of scraps of fish and dumped it on the rocks... a huge sea lion scrum ensued as they devoured the fish heads while the pelicans and seagulls circled looking for an opening... pretty wild. At last I got some close-up shots of sea lions.

I asked for directions from some carabineros and ended up talking to them for 10 minutes about the trip. They said I was pretty dark for a gringo from all that desert sun... They set me straight on the exit from the city, it's a 500 meter climb from sea level up over the cliffs that loom over Iquique. There are no switchbacks, just one 15 kilometer-long slope cut into the side of the cliffs. It's a miracle I escaped without a flat, the shoulder was a veritable hardware store: pins, nails, screws, bolts, rebar, broken plastic, broken glass, you name it. After the first climb there is a short plateau with a town called Alto Hospicio. Paragliders were taking off from here all day to float down to the beach at Iquique, it looked like good fun.

After Alto Hospicio was another 500 meter climb over the next set of mountains, then a short decent, then a 250 meter climb to reach the high plain desert. The road passes some of the abandoned saltpeter mining towns that Gustavo from Santiago had told me about. The land is dug up for miles around from the mining. I had the wind at my back for the last 15 kilometers heading east before the junction with Ruta 5, when I turned north it became a crosswind that slowed me right down. I lasted for another hour or so before I decided to pack it in and camp in one of the abandoned mining areas. They make for good cover from the wind at least...

When I fired up the laptop I discovered the screen was broken, the left half is just grey. Fun trying to figure out how to do everything with no start menu... trying to remember all those windows shortcut keys.