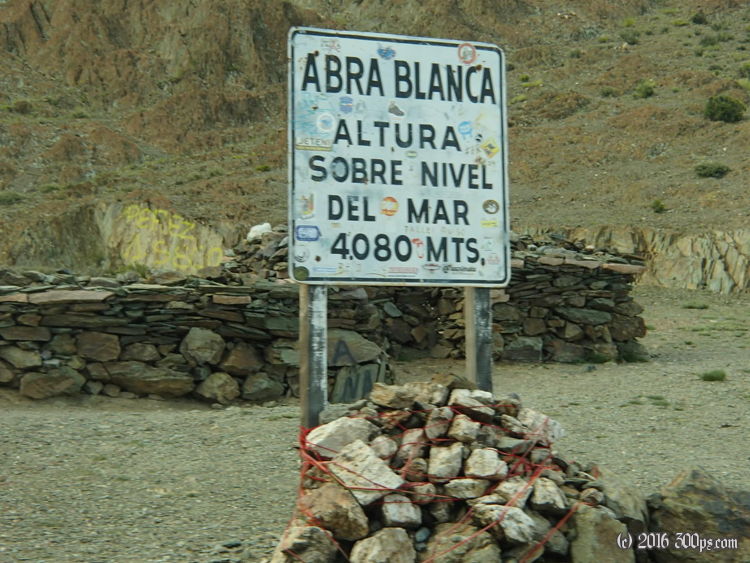 A lot of climbing today, pretty much continuously. Not a lot happened other than the climb. I stopped at a tiny village around 12, bought a bottle of Fanta from a restaurant, and filled up on water from a woman who was washing clothes by hand. It got chilly the higher I went. I don't know how I didn't get wet, there were thunderstorms bracketing me both from the North and South. The clouds kept the temperature down to around 15 degrees. I ran into a gendarme checkpoint where they told me the pass was open and that I should check in at the station in San Antonio so they could notify the border post that I was coming. As I was leaving one of the gendarmes asked if I had one of those florescent safety vests. I said no. I could see he was contemplating making a deal out of it but then he just waved me on. Too much work to give me a hard time about it. What could they do, send me back to Salta? That's the first time someone has asked me about a vest...

It turned out that there was a pass to get into the valley where San Antonio de los Cobres is, the pass is called Abra Blanca and the summit reaches 4,080 meters. I was feeling the altitude towards the end. After Abra Blanca is a 5 kilometer decent on pavement until ripio picks up for the rest of the way to San Antonio (about 25 kilometers). It was washboard-flavored ripio. Hmmm my favorite.

San Antonio is hidden down in a canyon, just like Río Mayo in Chubut, Patagonia. On my way down I could see cars heading north on the 40, their dust clouds looking like comets streaking across the pampa. Lots of similarities between Río Mayo and San Antonio. The town looks very industrial, I rode around looking for a kiosko that was open, not much going on on a Sunday night. A car stopped at one point and a guy asked if I was looking for a place to stay. I said yes, a campground, and he said the only place was behind the church. It's not really a campground, just one of those Argentine grill zones, but it was late and I was too tired to go looking for something else. I set up in the crazy wind and made dinner in the tent using the panniers as a barrier to keep the wind out. I don't like camping like this in a town. I feel pretty exposed, I would rather be out in the countryside. It is what it is. When I met those Canadian motorcyclist back in Villa Union we talked about wild camping, there are pumas up in the cordillera here and they were worried about them. They even had a story about a jogger who was killed in BC where they are from. I much prefer my chances with the pumas in the wild than with the humans in a town.