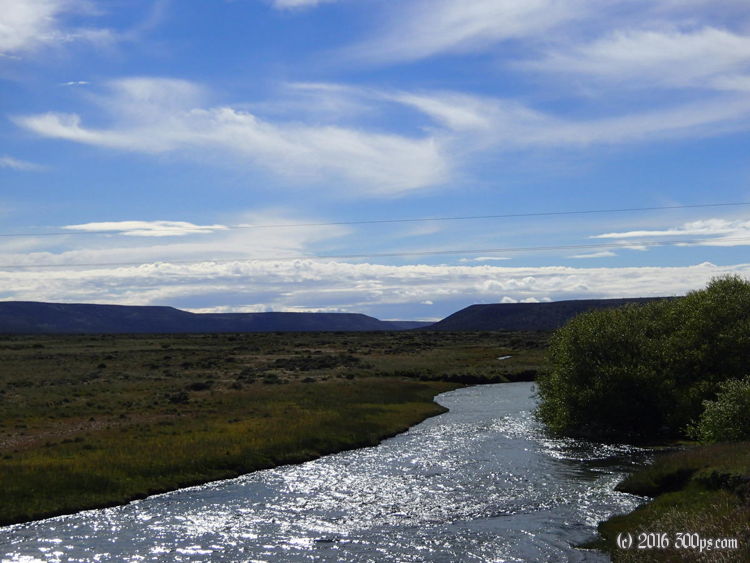 Around 4 am a couple of foxes started barking? (not sure what the verb is for the sound a fox makes, it's creepy whatever you call it...) around my tent. They clearly were not happy about my presence on their territory. They kept it up for a good half hour until I realized they weren't going away, got out of the tent, and started throwing rocks in their direction. After that they left me alone.

The wind was back in a big way today. The combination of fierce winds and bad ripio had me crawling all day: average speed of 6 kilometers per hour over close to 8 hours of ride time. Lots of falls and skidding out in the sand. I couldn't hear anything from the noise of the wind which pissed off a few trucks who were trying to get by me. The grader came by again and he pointed over to the far right of the road to say this is where I should be. The far right of the road was completely unrideable, I would have spent the entire day walking if I had followed his instruction.

I stopped in Dr. Rojas for junk food and water, that was the only break from the monotony of struggling against the wind. A number of people stopped and asked if I was ok. At around 5pm 2 guys in a pickup made a concerted effort to convince me to take a ride with them to the next town. I thanked them profusely but insisted on riding, it's what I'm here for after all. I'll accept a ride offer if there is a true emergency.

It was difficult to find a place to camp because there were no trees to be found, just rolling hills most of which are fenced in for cattle and sheep. I eventually camped between a few little bumps in the hills, not much cover from the wind but at least I was out of sight of the road. Some comical moments trying to set up the tent as it got tossed around by the wind. I was pretty demoralized until I made dinner. There is something about being able to cook a hot meal that just makes everything seem ok. I am beyond exhausted and going to sleep a.s.a.p.