5k north of Cuyca to Jaén: Hot like summer 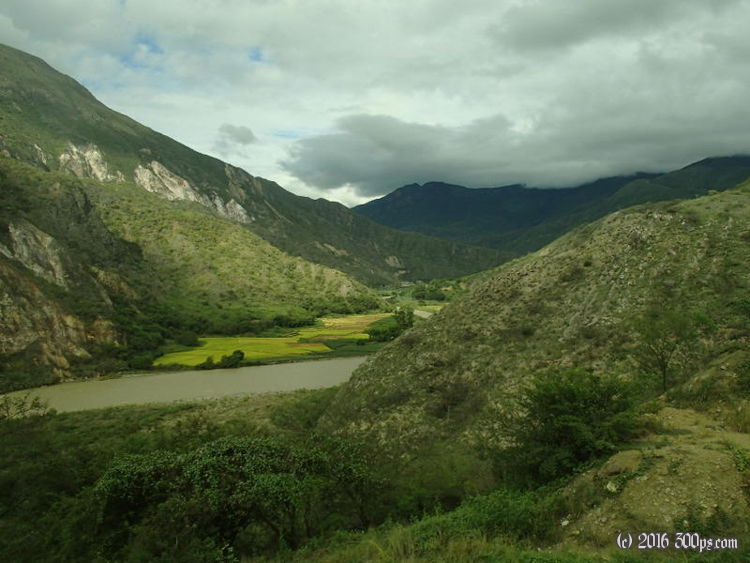 It starting raining around dawn and I thought here we go again, but it didn't last long. My front tire was flat again. I pumped it up hoping it was a slow leak so I could at least get to Jaén. It got hot quick and stayed that way for the rest of the day. When there were no clouds to block the sun I was sweating profusely. I stopped for breakfast and was fed a steak and rice dinner... but with coffee so that makes it breakfast. I spent some time talking to the woman working there and her two kids. They asked lots of questions about where I had been and wanted to know what people ate in each country.

There was a longish climb to get up to Jaén, gently graded and paved but the heat made it an effort. I rolled into Jaén around noon. At the entrance to the town some soldiers stopped me and we went through the usual questions. It's amazing how almost all Peruvians ask the exact same questions, as if they had learned it in school or something. When I arrived at the Plaza de Armas a bunch of people latched onto me - I had a crowd of about 15 people around me - asking... guess what... the same questions! Oh well. I found a decent hospedaje with a 4 dollar room, then went looking for tube patches. I found them around the corner at a bike shop where the owner said he has done work on a number of cycle tourists' bikes that have come through here. I bought some patches, got on the internet, then went back to the hospedaje to patch my tubes. They are all in really bad shape... I used all the patches trying to clean them up but they are still leaking. I could only find those Thumbs Up patches in Argentina so that's what I've been using. They are total crap. All the leaks in the tube are from old patches that are falling off or disintegrating. I'm not sure what I'm going to do about tubes, I'll probably go back to the same bike shop tomorrow and see if he has a solution. No way he has 28 inch but maybe 29ers, those should work in theory.

I spent some time talking to another guest at the hospedaje who told me the story of Alan Garcia (former Peruvian president) being exile to France. A big chicken dinner and some more internet time then I'm headed for hopefully a good long sleep.