Chos Malal to Andacollo: The plan was to take it easy 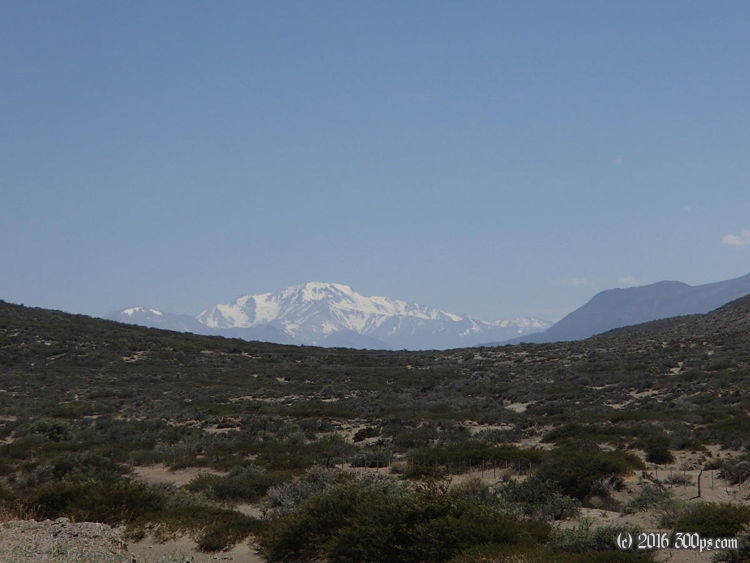 When I went to bed last night I figured I would take it easy today. It had been a long day and I was feeling tired; but when I woke up at 7 I felt quite good, in spite of some other campers that partied until dawn. Thank god for earplugs. When I got out of the tent there was another tent right next to mine; they must have come in really late and I didn't even hear them set up. I took my time getting ready, re-taped my handlebars, and said goodbye to the Canadians before heading into town. I got a coffee and updated the blog at a YPF station (these gas stations are great for getting on the internet). Afterwards I went shopping to stock up on food for the trip into Chile. It was 10:30 before I finally rolled out of town.

Crossing the bridge to the road to Andacollo my bottle of Pomelo fell out of the water bottle holder, the cap broke and I lost about half the bottle. Tragic! Pomelo is not to be wasted. It was hot and the road climbed, first up to about 1,150 meters before dropping down to 900, then a long climb of about 25 kilometers up to 1,600. I kept thinking that this would be the last set of switchbacks only to go around a corner and find more. There was a short descent after this climb where the pavement ended, then more climbing on ripio. A couple in a white car stopped and asked me if I wanted something cold, I said no thanks as I had just refilled my water bottles from a spring. A few minutes later another couple stopped and asked where I was from and what I was doing. We joked for a few minutes then the guy asked me if I was Catholic... I said no, where I come from we are all Protestants, was that going to work against me on the climb? 4 more kilometers then a long descent down to Andacollo on bad ripio. This section was pretty dangerous because of the grades, the washboard, and the loose gravel. I was glad I wasn't climbing it in the other direction. It was already after 5 when I got to the town, it seemed strange that so much time had gone by, that one climb pretty much chewed up the day.

I was debating whether or not to continue on past the town when I noticed my front tire going flat. I was right in front of the tourist office so it seemed like destiny. I went in and asked about campgrounds, they directed me to the municipal campground down by the river. The two girls in the tourist office were really friendly and enthusiastic. We talked for a while then I went in search of more Pomelo. Coming out of the shop a guy asked me where I came from and we ended up talking for a half hour about the state of Argentina. One of the quirks of this country is a scarcity of coins. It's gotten a lot better since I lived in Buenos Aires; at that time it was real pain in the ass. The buses only functioned with coins and there were no coins to be found. Everyone was hoarding them for the bus... and as it turns out the bus companies were stockpiling them and extorting money from the banks to get them back. In shops they used to give you candies instead of change when you bought something. I have an English friend who once went to her local shop with a handful of candies that they had given her in change and demanded that they accept them for what she wanted to buy! It didn't go over too well... So now there is an electronic card system for the buses which has mitigated the coin problem in Buenos Aires. The problem is still alive and well in more remote places though, just today a shop gave me back my coins because they couldn't make smaller change. This guy I talked to at the shop was convinced that it was only a matter of time before Argentina has another economic meltdown. I tend to agree with that sentiment.

Moving on... I went for an ice cream and then headed to the campground, nice place on the river, and absurdly cheap: 8 pesos, which at the official exchange rate is only US $1.63. That has to be the cheapest campground I've ever stayed in (that wasn't free).

It was still early so I used the extra time to patch tubes, I had three that needed it, and to clean the drive train. Each site had a sink so I took advantage to give the bike a really good cleaning. I figured it was a good idea after riding through volcanic ash for a few days. When fixing the tubes I noticed that two of the flats were caused by the tire liners, where the liner overlaps the end is digging into the tubes.

Made a huge dinner that took a long time to cook because of the wind. I burned through a lot of gas because it was really windy and there was no place to get good cover. I think I have enough to get me to the next major town in Chile though.