Andacollo to 14 kms east of Paso Pichachén border station: My kingdom for a coffee, a sandblasting, and amazing landscapes 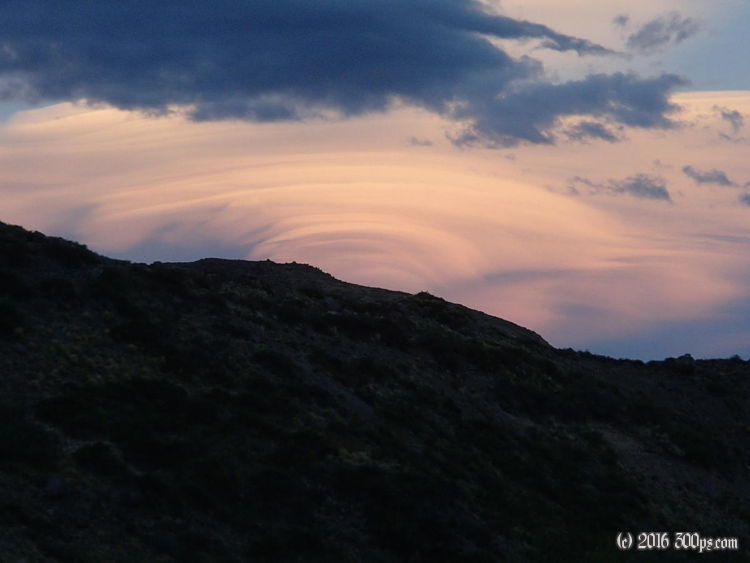 Some teenagers decided to end their night of partying by coming to the campground at 6:30, blasting music from their car, and dancing on the picnic tables. Well that got me up early. I was determined to find a coffee this morning so I climbed back up the hill towards the center of town. During the climb a guy passed me on a mountain bike and we exchanged greetings. He was waiting for me at the top and we started talking. I told him I was looking for coffee and he said he would accompany me. We went to the gas station where a woman named a few places and offered hot water for mate... "Somos más de mate nosotros", not I, I was desperate for coffee. As we left Ramón said everything was probably closed being Sunday morning, so he invited me over to his house.

He lives with his wife and adorable 2 year old daughter in a house overlooking the river canyon. He made coffee (awesome coffee) and served pan de fruta with dulce de leche. I spent an hour there talking with him and his wife about the region, Andacollo, and travel. He said the main economic drivers in the area are livestock and government employment. The area was originally settled to mine gold and silver. Ramón said that at one time they called it California Sur because of the quantity of gold produced. There is no more mining, the government keeps trying various strategies like fostering pine plantations as a way of keeping people from leaving.

Very enjoyable conversation, really nice people, and when some other friends of theirs came over I made my exit. I stopped at a store for, what else, a bottle of Pomelo, and chatted with a woman who asked about my trip. The clerk jumped in to the conversation and said a couple of Germans had come through on horses with a pack mule and a dog a while back.

It was already 11:30 by the time I got out of town and onto the road towards Pichachén. It was all ripio all day, with sharp climbs and oodles of wind. It reminded me of the Corcavado - Río Pico area where I started the trip, only this time it was a lot hotter. I stopped at a small despensa in Guañacos for, drumroll please... another bottle of Pomelo. I talked to a guy drinking a beer outside the store who said a couple of young Americans had come through hitchiking and trekking in the mountains. He offered me a beer but I told him it would probably kill me to do one of these climbs with beer in me.

A few kilometers later a couple of teenagers in a beat up pickup stopped and asked if I needed water and if the bike was okay. I've had many friendly encounters between Las Lejas and here. Neuqén province has been good to me. I said no as I was already watered up and thanked them.

While the road went south I had the wind, but then it turned towards the west and dropped into the Río Reñeuvú canyon; the wind was just screaming down this canyon from the west. I got seriously sandblasted for the first half hour, after that I was in a zone where everything that wasn't a rock or a tree had already blown away. I went on for another 10 kms of this then I saw a good camping possibility by the river and decided to call it a day. The scenery was beautiful all day long so I never got frustrated with the wind.

My stove hasn't been sounding too healthy lately so I gave it a good cleaning and oiling. It ran a little smoother tonight but not what I was hoping for. I don't think this bencina blanca I bought in Coyhaique is the cleanest of fuels. I cooked up all my vegetables because I will be going through the border tomorrow, no foreign vegetables allowed in Chile. One of the Canadians I met in Chos Malal the other day told me that he once got fined 250 dollars for entering Chile with a couple of apples he had forgotten about. Yikes! And he said the 250 price tag was after negotiation, they wanted 500 US at first.

Dinner came with a healthy helping of sand. While I was cooking a huge wind gust came through and covered everything... nothing was going to stop me from eating every last bite, however.

Only 55 kms for the day, ripio and wind slow things right down. The tent is really whipping around right now, the Nuss has held up so far, I'm not particularly worried, although I did tie my rain jacket over the foot of the tent to close up the vent just in case it rains.