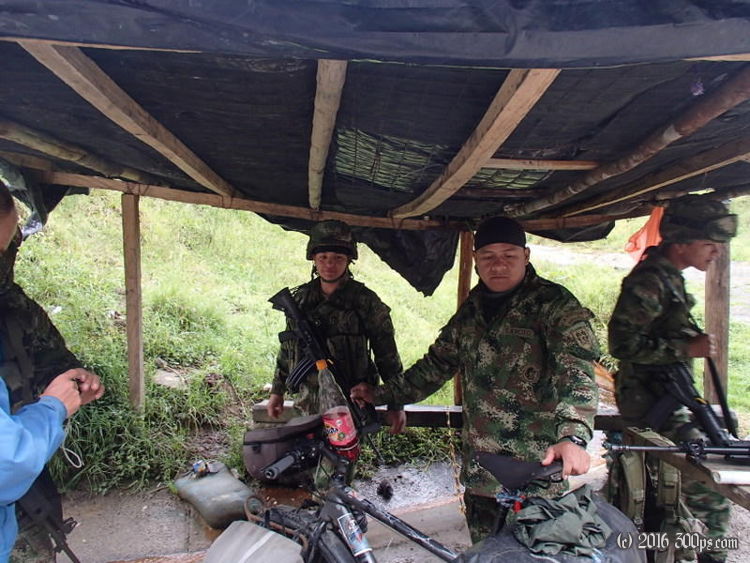 Breakfast at the hotel then a moment of dread as I pulled on my clothes still soaked from yesterday. It rained pretty hard for a while then tapered off to leave us relatively free of wetness for the rest of the day. Some big climbs to start got us up to around 2,200 meters before a huge descent down to Bruselas. We joked around with some soldiers at the top and took a few pictures. On the way down we ran into an Italian cyclist who was fixing a flat tire with the help of an American who started cycling from Alaska two years ago. We chatted with them for a bit before continuing the descent. At the turnoff for San Augustín we stopped for an excellent lunch at a roadside place run by a gregarious woman who was soon joined by a few other gregarious locals. I was too busy shoveling down the food to pay sufficient attention to their questions. More up and down for another 15 kilometers to a bridge where the road became nothing but up for 5 or 6 kilometers. A tough way to end the day but there was some beautiful scenery of a river canyon lined with a number of huge waterfalls.

Once in San Augustín we tried to track down the Casa de los ciclistas only to find out that it has been closed and sold to some Russians a good while ago. We ended up back at a campground where I had asked for directions earlier. Cheap but basic... hopefully it won't rain tonight.