Hell's Canyon to Ontario: the eclipse, a photographic phlop

Strange mid-morning twilight, 360-degree sunset, and a few alcoholics to liven up the mood. 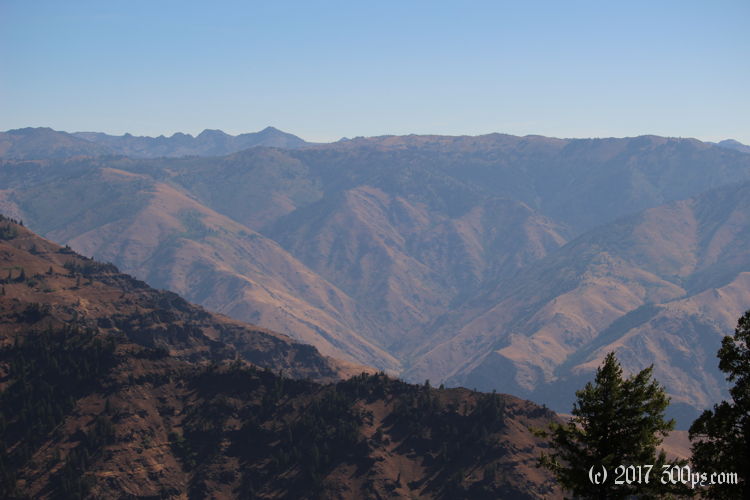 I pack up early and ride up to the Hell's Canyon overlook to get a glimpse of the eclipse. There are quite a few people here, some pick-picknicking, many with those "eclipse glasses". I'm unprepared on that front... a guy lends me his a few times so I can look directly at the sun. Pretty cool to watch the shadow of the earth slowly take over the orange glob that I see through the glasses.

It slowly gets dark and there is a kind of sunset in every direction. The shadows of the trees get long and I can see a few stars coming out.

Some guys in their 30's show up, with wives and small children, and promptly start drinking beer and popping champagne corks. They've got a good buzz on by the time the eclipse reaches it's apogee. I didn't ask them what they do for a living but they remind me of what we used to call "sales weasles" in the software business: loud, obnoxious, often drunk. I'm ready to move on out of here as soon as the eclipse starts to wane.

The ride down the canyon is a blast: tight turns and better pavement than the chipseal on the way up the other side. I fly out of the national forest onto yellow prairie; another long road through a canyon has me dipping and weaving for a few hours. I come out of the woods, so to speak, at Baker City, Oregon. I cross over I84. There is nothing out here, Baker City is just a small prairie town, but the westbound lanes of the highway are jam-packed with people heading back to the west coast after the eclipse. I'm feeling lucky that I'm heading east.

The heat of this prairie/desert sun gets to me by mid-afternoon. I pull into a motel in Ontario so I can get a proper shower. The motel is run by an Indian family, the son says he can't check me in, out comes the mother. She says the price is $70. Seems like a lot for this place but I looked on line and they are getting $150 per night at the Motel 6: eclipse price-gouging. I say okay just to not have to camp tonight. Later I realize that the woman charged me $88. I go back to ask her why. She says the difference is taxes. $18 in taxes? At first I assumed she had made a mistake but now I see she did it on purpose. No way there's $18 in taxes I tell her. She relents and says she will credit me $12. I ask her to write down on the receipt that she owes me that amount. She says no. I point out that if it was an honest mistake she would have no problem rectifying it and giving me proof that she owes me the money. She writes it down on my receipt and apologizes. I'm thinking I'm going to have to chase her around to get this money back. (Update: I did get a credit on my card a few weeks later).