Wenatchee to Hat Rock: passed 150,000 miles; and the hospitality of a fellow beamer rider

I bought Greta 17 years ago with about 70k on her, I never thought we'd still be riding together and now passing 150k all these years later. Almost all of those miles are from long tours. I barely rode her for the last 10 of the 17 after I discovered cycling but here we are again... 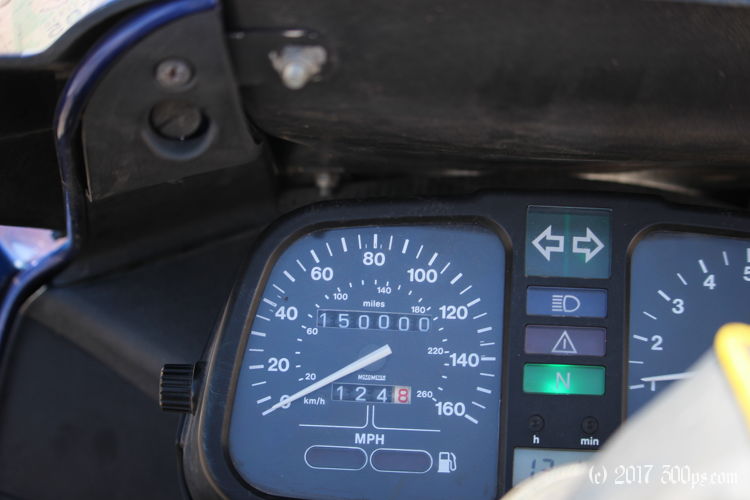 Out of Wenatchee after a big breakfast, it's another hot and dry day...surprise! I head down the Columbia again, planning on riding through Hanford National Monument but I take a wrong turn and end up too far to the north. I stop when Greta hits 150,000 miles on the odometer.

I bought Greta 17 years ago with about 70k on her, I never thought we'd still be riding together and now passing 150k. Almost all of those miles are from long tours. I barely rode her for 10 years after I discovered cycling but here we are again.

I stop in Kennewick at the REI store. Every time I go to an REI store I leave significantly poorer; today is no exception. I replace my heavily duct-taped tent with an MSR Hubba Hubba NX for $300-something. Next I buy a backpack, the kind you can do multiple day trips with. I've been wanting to get out for overnights into the back country. A few bandannas and a pair of sunglasses round out the shopping cart. $600-something is the damage...

I'm planning on heading east but at the Port of Walla Walla I get a look at the huge cliffs bordering the Columbia as it turns south. It's too tempting to resist. I'm taking a bit of a risk because I'm already at 170 miles on the odometer and it doesn't look like there are many towns down that way. I enjoy the road as it winds along between the cliffs and the river.

I come to a Corps of Engineers campground called Sand Station. It says group camping only, and by permit. I'm tired and hot so I call the number on the board just on the off chance they'll let me camp. No chance, says the guy on the other end of the line, it's for group camping and only by permit like the sign says. Fair enough. I'm at 185 and the reserve light is on. I turn off when I see a hospital sign, there's got to be gas near a hospital, and in the event there is. Just at 200 when I put it in 3 gallons, not filling it because the gas is silly expensive here.

I head back to the river where I saw a sign for a private campground. I really don't like private campgrounds but it's late and I'm low on options. I pull up in front of the campground store, a guy in a pickup truck pulls up behind me. His name is Gary, he's a motorcyclist, and he says I can camp on his property next to the campground for free. Sounds good to me...

Gary offers dinner of casserole and salad with biscuits. And to think I was going to be eating Kraft mac & cheese that I bought at the gas station tonight, what a change of fortune! He's traveled extensively on motorcycles and has been on the receiving end of a lot of generosity; he says he's glad to pay it back. We spend the evening talking motorcycles and the places we've been. He used to live up in Alaska working as a welder and a mechanic. He has an R1200GS that isn't running at the moment. He's gotten stuck on it twice, it's giving him nothing but trouble. He can't figure out the current problem and he's been working on bikes his whole life. BMW just recommends replacing expensive parts willy-nilly until it works... I've run into that mindset myself.

I really needed this: home-cooked food, good conversation, some company. The tent goes up easy and is comfortable inside, happy with it so far (but it has no pockets inside, I miss those from my old tent).