Narvik to Nordkapp: The race to Nordkapp, midnight sun, trying to sleep on top of the motorcycle in front of a gas station. 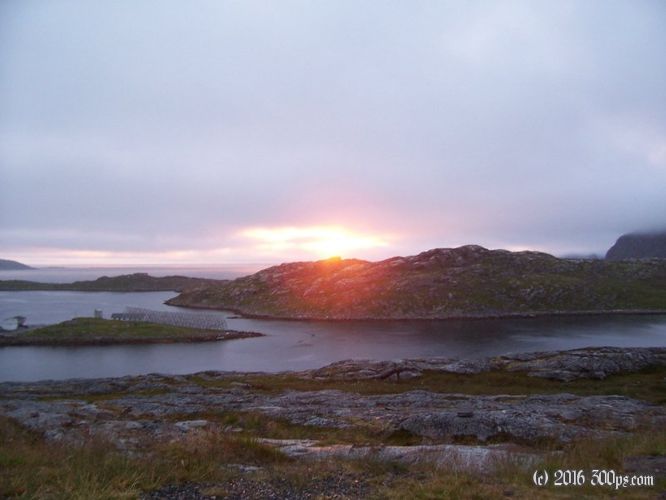 Up early, breakfast and out the door at 8:30am. And so begins one of the more surreal 48 hour periods of my existence. When talking to the Japanese guy on the Suzuki last night I had formulated the plan that if the weather was ok when I got to Alta I might just continue on to Nordkapp. I figured I wanted to see the midnight sun anyways so why bother finding a place to sleep that night.

Wed. 8:30AM - Leave the hostel without paying for breakfast. Kind of lame but I'm just sick of getting robbed for accomodations every night, particulary this place that charged me 10 bucks for sheets.

Wed. 8:45AM - Head to the motorcycle shop in Narvik, I need a headlight because my low beam burned out yesterday, and my spare doesn't have low beam either. Not sure how I managed that. He has the right part and I've installed it and am on the road at 9:10. I ask about an oil/filter change but he doesn't take credit cards and I don't want to withdraw any more Norwegian cash, I should be in Finland in a couple of days.

Wed. 11:00AM - I’m in heavy fog in the mountains, so thick I’ve got my hazard signals on in case someone rides up on me from behind. At one point the fog clears while I’m riding along a cliff between two layers of clouds: one above me and one below the cliff that is filling the valley exactly like an ocean; if I didn’t know how high up I was I would have sworn I was looking down at the sea.

Wed. 1:00PM - It’s been raining off and on all day long, except for a half hour of brilliant sunshine when I shared a Fortuna with a biker from Holland at a rest stop. He's psyched, he's been rolling and smoking a tobacco himself that he says sucks in Norway. He came over to Bergen on the ferry.

Wed. 5:00PM - Get to Alta and gas up. Rider on a red K75 drives by again and waves. We've been leap-frogging each other all day but haven't spoken. Gas station dinner, Bert is not too happy about it. I decide to go for Nordkapp.

Wed. 5:15PM - I break out the heated chaps and vest for the first time since I've come to Europe. It's in the low 50's and raining on/off.

Wed. 7:00PM - Start seeing reindeer as soon as I hit the Nordkapp peninsula. They are really dangerous. They blend in with the landscape and tend to hang out on the road.

Wed. 8:00PM - The landscape is beautiful. No more trees, just eerily empty hills with a strange light. It really feels like the end of the world.

Wed. 10:00PM - Get to Honningsvåg and gas up. Only 40 or so kilometers from Nordkapp. Gas here is like 2 bucks a liter. That would be $7.57 per gallon. I see the Dutch guy drive by while I'm at the gas station. He must have made the same decision to go for Nordkapp instead of staying in Alta.

Wed. 10:45PM - We made it to Nordkapp! And it's fucking cold and foggy! How's that for anti-climatic? 30-40 feet of visibilty, there will be no midnight sun here. The drive up was dangerous with the thick fog and sharp turns.

Wed. 11:15PM - Drive to Skarsvåg looking for the sun. You can see that the sun is out at sea level, Nordkapp is so high it is in the clouds right now, but Skarsvåg is facing the wrong direction. I pull out the map and find the closest village that is on the west coast and head that way.

Wed. 11:45PM - Get to Gjesvaer, beautiful spot on a cliff overlooking a small village and the ocean. Strange light on the water. After a few minutes a VW mini bus pulls up and a guy and a young girl get out. They are speaking French so I say bonsoir. We get to talking and he offers to make me a cup of coffee.

Wed. Midnight - As if on cue at midnight the sun starts to comes out. We sit and drink coffee and eat "petits beurres" with chocolate. They are from Nancy and have driven up through Sweden, then they are going down through Norway. I think this is the best cup of coffee I have ever had. We talk for an hour and watch the sun, then they are off to park at the bottom of the cliff to sleep.

Thurs. 1:20AM - It's cold and windy. I decide to head back to Honningsvag to see if I can get some gas. When I get there they are closed of course, being after 1am, and none of my credit cards work in the automatic machine. It says Visa is temporarily out of order, my MasterCard isn't a Eurocard and is therefore not acceptable, and it justs spits back my Amex card in disdain without saying anything.

Thurs. 2:00AM - My guide book says there is an all-night waiting room located at the end of the port but it's closed. It is really bizarre to be walking around a city in broad daylight at 2am, not a soul to be found.

Thurs. 2:30AM - I decide to head south with what gas I have. I go through the toll again on the way out. They get you coming and going at the tunnel. A German on a Transalp coming in the other direction flags me down. He is running out of gas as well. Apparently the automatic pumps aren't working in Oldersfjord either. I tell him about the machines at Honningsvag and he thinks his Mastercard will work and offers to get me gas if I go with him. I say ok and start heading back with him. He drives like shit and almost gets himself squashed going around a tight corner when a car comes in the other direction. I'm so tired I'm not thinking clearly. If I go with him I will have to go through the toll two more times (which means about $60), even then with a full tank I won't be able to get to Kirkenes so I flag him down and say I'm heading south again. I figure it is best just to get off the road and try to sleep somewhere.

Thurs. 3:00AM - Get to Oldersfjord, there is a carload of Finnish people camped out at the gas station. Their cards aren't working either so they are going to wait until 9am when the station opens. I hunker down on top of the motorcycle, putting on two pairs of socks, chaps, two jackets plus rain gear then cover myself and the bike with the tarp. I park against the wall under an awning to keep the rain off. All that and I still gets so cold that my muscles keep cramping up all night. When they cramp it wakes me with a painful jolt. I get maybe two hours worth of sleep.