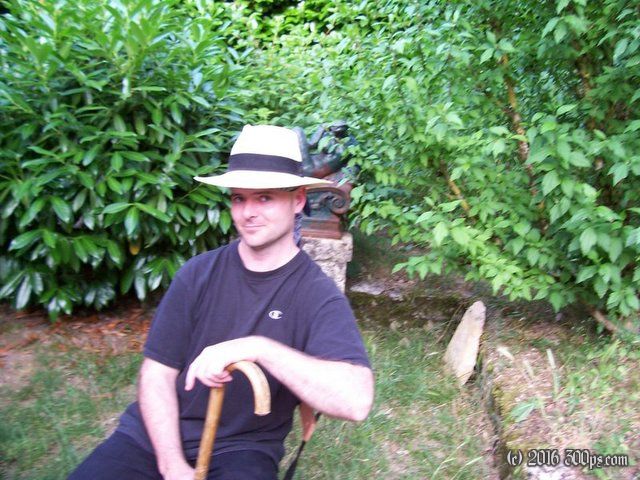 Being here is a relief. If I had to do this trip without having friends to visit, destinations to head towards, it would be much less interesting. I first met these friends when I moved from New Orleans to Paris. At the time they were the only contacts I had in Paris; they were friends with my uncle when he had lived there in the 1970's.

The move from New Orleans to Paris was a big shot in the dark. I had just graduated from university and had no idea what to do next. Moving to France sounded like a good idea at the time so I sold everything I owned, which at the time consisted of a 1979 Honda CB750 Custom and a futon mattress. I gave my Cuisinart to a French girl I had a date with right before I left. I don't know how I ended up owning a Cuisinart. The garage sale got me about 900 dollars, plus some meager savings, minus a one way ticket to Paris netted me about 1,200 dollars on which to live. The plan was to show up and live on what I had until I could find a job.

My uncle and I had spoken and we had calculated that given the money I had and the prices in Paris I could live for about 3 months without finding work. We neglected to factor in inflation (he hadn't been there in a while) and the shitty exchange rate which was at a very low 4.25 francs to the dollar. When I arrived I discovered I had enough to live on for about a month. After my flight I ended up in Paris at the Gare du Nord totally exhausted and starting looking around for hotels. Everything was about twice as expensive as I had expected and I was starting to panic. I eventually found a hotel for 110 francs on the back side of Montmartre, the woman at the desk gave me the room for 80. I must have looked very desperate.

I eventually did find a job and a much cheaper place to live. In France everyone gets paid monthly. It took me 3 weeks to find the job, then I worked for a month before getting paid which totalled 7 weeks living on my original stash. At the end I was pushing it. Two things kept me eating: restaurant tickets that I got through work and weekly meals at these same friends' house.

Lots of laughter all week. Dinner at their neighbors' place, from an old French family that has been in le Lot since the 14th century. Her side of the family were "pied-noirs" in Morocco where she was born. Very polite dinner, nothing but vous. Tarte de courgettes/chèvre. Quite good. Apple crumble, quite good as well. We finish it off for breakfast the next morning.

I call down to the BMW dealer in Agen and they don't have the rear-view mirror either so I have them order it. Reference number: 46632307640. I order it on Saturday and it comes in on Thursday. On Thursday I head down to pick it up, nice ride but nothing too interesting going through le Lot and le Lot-et-Garonne. Agen is nothing to write home about, a mostly industrial city. I find the BMW dealer without too much trouble and pick up the part: 28 Euros after tax. While I'm there I have them look up and price the fairing pieces damaged during the flight over.

Throw in labor and miscellaneous parts and this is going to be expensive. I would only factor in the tete de fourche but might add in the right rearview holder as well. Stop for a Schweppes in Agen leaving town, get seriously lost on the way back. All of the road signage in France is based on "direction", meaning a city that is on or at the end of the road you are travelling. If they happen to list a town I'm not familiar with it makes for difficult travelling, since I've never been to most of these places and have no idea which general direction a town indicates. I end up going all the way to Cahors then taking the sure route out to Sauzet.