San Rafael Ranch to Parker Canyon Lake: a day at the zoo

A skunk walks right by me and climbs the embankment onto the road. I get stuck behind him for about 10 minutes while he ambles along, not a care in the world. I don't dare pass him so I just coast patiently until he finally decides to get off into the grass on the right... 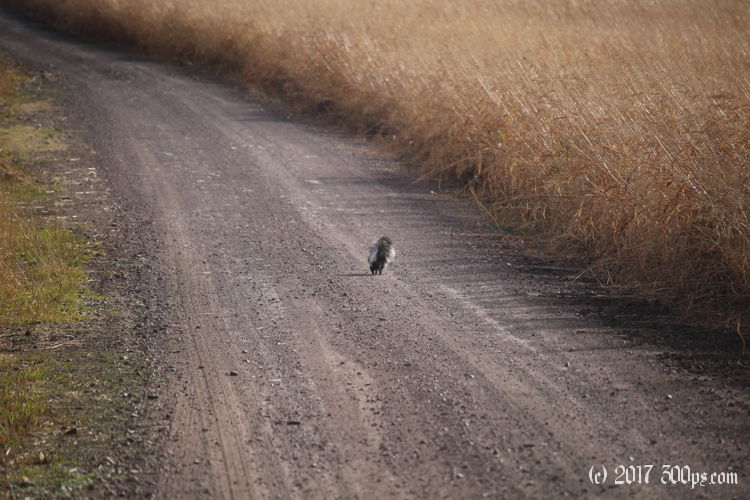 I'm awake before dawn but I don't start packing until the sun has gotten high enough to start warming up the tent. I'm relieved no one came along to bug me last night.

At Lochiel I'm just a stone's throw from the border, then I turn northeast through San Rafael Ranch. The maps want to route me on longish detour east then north to get to the lake but I plan on taking a shortcut using forest service roads. I'm sure they will be rough.

I stop at the Santa Cruz River, which surprisingly has water in it, to filter a couple of liters. A skunk walks right by me and climbs the embankment onto the road. I get stuck behind him for about 10 minutes while he ambles along, not a care in the world. I don't dare pass him so I just coast patiently until he finally decides to get off into the grass on the right.

I ride myself into a corner on one of the forest service roads I thought would be a shortcut. The road ends at a ranch house complete with gate covered in "Do not trespass" and "We will shoot your ass"-type signs. I backtrack, find another trail that gets on the mesa, and drag the bike up top. From here it's a long, slow climb through fields of grass until I come to a hill overlooking the lake. I pass a sign for the "Arizona Trail" near the top. I've seen these signs in a few other places in Arizona, for example in the National Forest next to the Grand Canyon. At that particular spot there was a sign that said riders needed to carry their bicycles through the canyon. I remember thinking at the time: no way no how with my setup.

I skid and and slide my way down towards the lake on viciously steep dirt road. I hope I don't have to climb out this way. Then I hit pavement, gloriously smooth, for the last half mile to the lake. I stop at the little store by the docks for a cup of coffee. The owner tells me about a few back roads, one towards the east that passes through Coronado National Monument, and one that runs from Benson northwest towards Phoenix for when I'm ready to go back to the city. The rancher I met near Nogales sent me a message today recommending that same Coronado National Monument road. That much is settled then, I'll try it tomorrow.

I ride back up the hill to the campground. The ranger comes over to talk while I'm reading the campground rules at one of the kiosks. He fills me in on the details of the Arizona Trail, he's hiked the whole thing himself (somewhere north of 800 miles), and now he's doing it again in stages with his girlfriend. We commiserate about the difficulties of finding water in the desert. He says he sometimes sets off carrying as many as 7 liters. That's a lot when you're backpacking, 15lbs of water alone. He tells me I can camp on the north side of the lake. I'm glad to have spoken with him, I really prefer to avoid the campgrounds. I ride down a dirt road, then hike a bit on a path with the bicycle until I come to the lakeshore. I set up right at the edge of the lake, hidden by a stand of manzanita trees. While I still have some sun I jump into the lake to wash off. It is absolutely freezing, but I dry and warm up quickly in the sun.

As soon as it sets it gets quite cold again. Tonight in the sleeping bag I'm wearing wool socks, my jeans, two t-shirts, a long-sleeve fleece plus my fleece jacket. I'm happy in my remote little lakefront camping spot. It's just me and the ducks... and the geese, and the herons, and the crickets, and whatever it is that's creeping around my tent. There's a lot going on at Parker Canyon Lake at night.