I'm able to ride some in the beginning but pretty soon I'm just dragging the bike up the narrow, steep switchbacks. A mile and a half into it I cross paths with a group of hikers coming in the other direction. They've caught me red-handed in my guilty pleasure: hiking with a 75 lb bicycle. God bless you, one woman says... 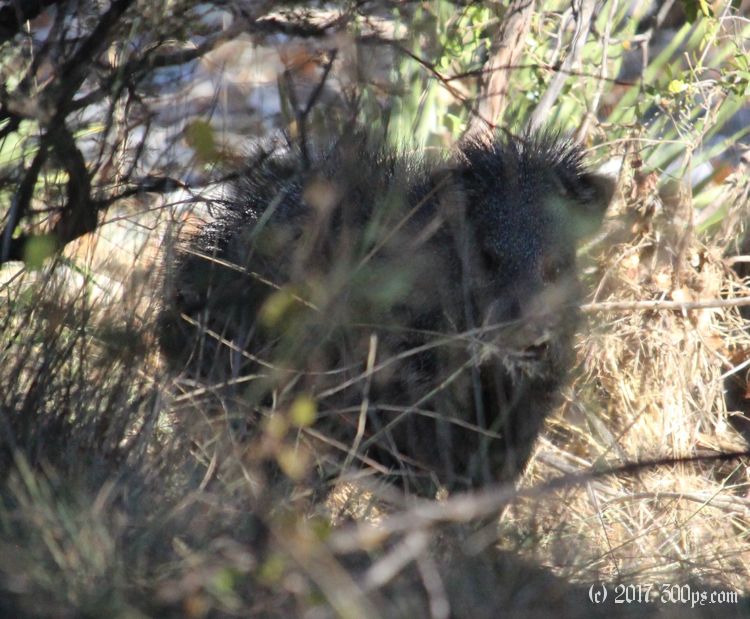 Cold morning, I stay in the tent until the sun starts to warm it up. Since I've got water here in the campground I take the time to double-check and patch all my tubes. That plus a long chat about bicycle travel with my German neighbors (they've toured in Europe) delays my departure until 9:30am. I was looking at the map last night, the Cochise Stronghold looks promising so I'll be heading north today to check it out.

A guy on a MTB stops to talk when I'm on the dirt road heading north to Cochise. He's got some good stories from riding in the area: he says one time he ran out of water in the Coronado National Monument and he called 911. The Border Patrol rescued him with a helicopter but it was too rocky to land directly where he was so they lowered a guy down, strapped him onto a sled, then they flew along with him dangling until they could land in a flat spot to bring him into the helicopter. Yikes. He says they put 6 IV bags into him at the hospital. I was kind of dreading something like that would happen to me on this trip but so far so good. This MTB'er is also a trail angel for the Arizona Trail

The road leads up to the mountains that form Cochise Stronghold then forks, one road going northeast, the other northwest. I take the northwest route, skirting the mountains until (from the looks of the map) it crosses directly over the mountains towards the east.

The road gets rougher and rougher, I'm climbing up a sandy/rocky wash, then it ends. From here on out it's a hiking trail. Uh oh, this is a little more than I bargained for. Oh well, looks like time for a hike-a-bike.

I'm able to ride some in the beginning but pretty soon I'm just dragging the bike up the narrow, steep switchbacks. A mile and a half into it I cross paths with a group of hikers coming in the other direction. They've caught me red-handed in my guilty pleasure: hiking with a 75 lb bicycle. "God bless you", one woman says. They warily pass me by with that "this guy is nuts" look.

I reach the top, exhausted, without much light left in the day. My work is not done, the way down is actually rougher than the way up. I'm really abusing the bicycle on this stretch, pounding the wheels down exposed rock, frequently lifting the bike over obstacles I can't ride through. I'm rushing at the end because I'm running out of light.

By the time I get to the campground it's dark. The campground looks full, and frankly I'm not in the mood to pay for a primitive campground (not even water) after all that work. I put on my headlamp and keep riding. There are a bunch of houses up here, still in the National Forest, so I have to go a ways before I come to some kind of equestrian zone where I can set up the tent behind some bushes beyond the dirt parking lot. I make dinner in the tent and collapse into the sleeping bag. It's warmer tonight, no wind on this side of the mountains. Early to bed so I can get out of here before dawn.