Alamo Lake to Wenden: into the wind

He's got a few stories about that area, says he knew a trapper who worked that land and made a good living from fox, skunk, and coyote pelts. Apparently the only thing he didn't like about it was that the fighter jet pilots were always using his truck as a practice target... 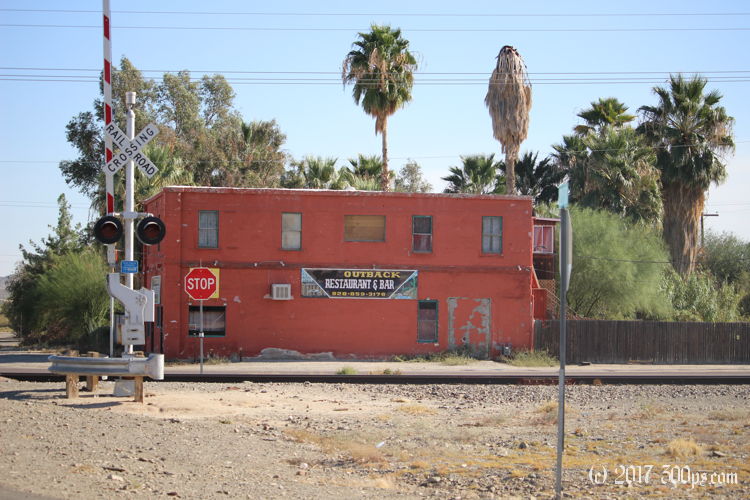 I'm a glutton for punishment. Instead of back-tracking to the main road I turned off of yesterday, I continue along the shore on two-tracks make by off-road vehicles. The grades are vicious going up and down the hills separated by washes with 6 inches of sand in the bed. About 3 miles of white-knuckle descents (I'm enjoying the disk brakes in these situations by the way), then dragging the bike across a wash, then riding as far as I can up the next hill until the rear tire slips and I have to haul the bike up on foot to the top. I'm already beat by the time I get to the main road and it's not even 9am. I promise myself no more adventures today, I'm sticking to the main roads.

On the way to the lake yesterday I went by an agglomeration of RVs. I though it was just a bunch of parked vehicles like you see in the middle of nowhere in Arizona, but today on the way back -- from the different angle -- I see that they have a little restaurant. The chance for a real breakfast is too good to pass up. Inside they have TV, Wifi, a bunch of people eating and chatting. It seems so odd given the harsh surroundings. The waitress takes one look at me and brings me a big glass of icewater with lemon. I must appear thirsty... I order breakfast. I start talking to the lady next to me, I tell her I was trying to get to the other side of the lake. She explains that the lake came up 40 feet higher than usual this year so any paths through the lakebed have been destroyed. She says the best bet would be to try and circumnavigate the lakebed, going a couple of miles to the north. Apparently that path was damaged by water as well, she's not sure if it is passable right now. All academic to me at this point. I don't have enough food to safely try it now, yesterday was my one and only shot. There is some discussion among all the parties at the bar about whether I could carry enough water from the lake to make it to one of the towns along the Colorado River.

The waitress is a character. We're joking around, she tells me a story about how she found some uranium on the ground and was carrying it until her friend yelled at her to get rid of it. Not the sharpest tool in the shed, she says. An oldtimer comes to sit at the bar, telling me about roads on the other side of the lake. He's got a few stories about that area, says he knew a trapper who worked that land and made a good living from fox, skunk, and coyote pelts. Apparently the only thing he didn't like about it was that the fighter jet pilots were always using his truck as a practice target, divebombing him as he rode around to check his traps twice a day. I can imagine in this heat you couldn't leave anything longer than that. I've had two cups of coffee by now, I better get going before I'm too high on caffeine... On my way out the door the waitress gives me the restaurant's card and says to call if I'm in the area and need to be rescued.

I ride about 5 more miles on dirt heading south until I hit the paved road that is the main entrance to the state park on the lake. What gain in speed I make from being on pavement is quickly lost to the strong wind out of the southwest that was hiding behind some mountains, waiting to pounce. I slog it out for another 30 miles into that wind, first across a flat plain, then up a long but easily graded pass, then downhill on the other side into a valley that's been tranformed into farmland. I always find it strange when I run across these big green fields smack in the middle of the desert. It just doesn't seem right.

At Wenden I stop at a run-down store that has the saddest fresh food display I've seen since Bolivia: a couple of shriveled potatos, some garlic, and two tomatoes that are actually in decent shape. I buy the tomatoes.

I don't get far down the road when I see a sign for a library and a campground. Sounds good to me. I hang out in the library for a few hours using their fast internet, then wander over to the campground. The host charges me 8 bucks to camp plus 2 for a shower. It's worth it, my first proper shower since I left Phoenix.

I still have no cell service despite the towers I see around. I guess this whole area is just a black hole for my provider.